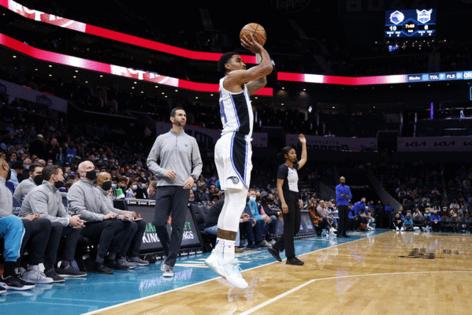 After fracturing his thumb against the Philadelphia 76ers on Nov. 29, the Orlando Magic rookie guard was sidelined and had to watch games from the bench for six weeks.

The last couple of weeks were especially difficult for Suggs, who hadn’t sustained a significant injury since the seventh grade.

Suggs, the No. 5 pick in last year’s draft, said he asked the team if he could play “every other day” for the previous two weeks.

But the Magic wanted to make sure the fractured bone fully healed to ensure there wouldn’t be any regression, meaning Suggs had to watch the 10-game losing streak Orlando entered Friday with from the sidelines.

“Not being able to help my teammates and bring energy, that was frustrating,” Suggs told the Orlando Sentinel. “It’s part of the process. Doctors and the training staff wanted to make sure I was fully healed so when I got back there were no setbacks.

“As tough as it was, it’s a great thing I was able to bring energy from the bench and see things from the sideline.”

Suggs’ wait to return ended Friday in the Magic’s 116-109 win against the Charlotte Hornets at Spectrum Center. The win was their first victory since Dec. 22 against the Atlanta Hawks.

Moe Wagner led the team with a season-high 26 points off the bench. Franz Wagner had 19 points, seven assists and five rebounds. Gary Harris finished with 18 points on 6-of-14 shooting.