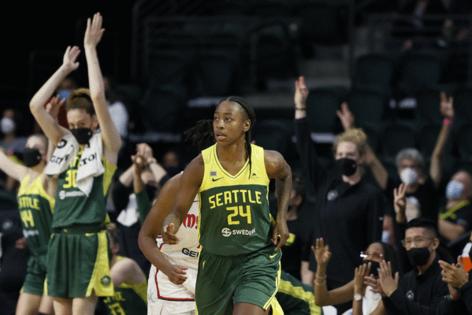 Perhaps the biggest offseason question for the Storm was who among its young stars would receive the team’s core designation — thus removing them from the free-agent market — and who would remain an unrestricted free agent?

On Friday, several reports around the WNBA said Seattle will core Loyd, in a move that guarantees the 28-year-old, three-time WNBA All-Star a one-year deal for the league’s supermax salary of $228,094.

Still, this doesn’t necessarily guarantee Loyd will return to Seattle in 2022.

Last year, the Storm designated Natasha Howard a core player at the start of free agency and a month later, traded the All-Star forward to the New York Liberty for two first-round draft picks and a second-round pick.

At the very least, Seattle controls the rights to Loyd, who was considered one of the most sought-after free agents on a star-studded market that includes more than 15 former WNBA All-Stars.

Last season, Loyd averaged career highs in scoring (17.9 points per game), assists (3.8) and steals (1.5). She was an early MVP candidate before falling off near the end of the season.

Without an injured Stewart, Loyd tallied a career-high 37 points to carry the Storm to a 94-85 win over the Phoenix Mercury in the regular-season finale and sure up a top-four playoff seed.

After an 85-80 loss to Phoenix in the second round of the WNBA playoffs that ended the Storm’s season, Loyd was noncommittal about returning to Seattle.