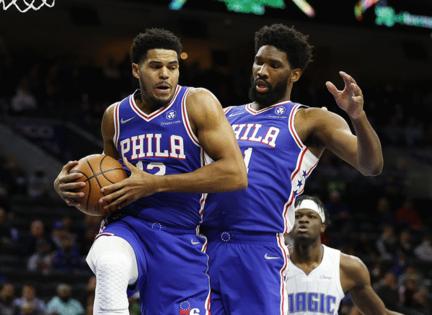 The Sixers posted a 127-124 overtime victory Monday night over a Charlotte Hornets squad that was minus three key starters and two rotation players because of COVID-19 health and safety protocols.

It marked the second game that guards LaMelo Ball and Terry Rozier, center Mason Plumlee, and reserve forward Jalen McDaniels missed after testing positive on Saturday. Meanwhile, reserve point guard Ish Smith, a former Sixer, missed his first game while in protocols. They will be sidelined at least 10 days or have to get two negative tests within 24 hours in order to return.

The Sixers know what that's like, with members of their roster having missed a combined 27 games this season with positive COVID-19 tests — and even that number is a bit misleading.

Tobias Harris missed Friday's 98-96 victory in Atlanta with lingering effects of COVID. Following that game, coach Doc Rivers said Harris was dealing with the flu. However, the starting power forward tested negative for the flu. The belief is the 104-degree temperature, sinus, and upper respiratory infections he started experiencing shortly after Wednesday night's 88-87 loss in Boston were the spin-off of his previous COVID diagnosis. His symptoms didn't ease up until Sunday morning.

"Obviously, being in the bed the last couple of days, I still have symptoms for my whatever we want to call it at this point," Harris said. "But I was just trying to work my way out there and see how I was going to feel out there."

Aside from feeling a little fatigued, he felt good after getting through the first four minutes.

Harris, a well-conditioned athlete, still has moments when he's having a tough time catching his breath.

How good can this Sixers group be? Its ceiling remains hard to grasp at the moment — Keith Pompey

ORLANDO, Fla. — After two-plus months of not playing together, the Orlando Magic returned to a familiar — and their best — starting lineup for Sunday’s matchup against the Chicago Bulls.

Although that unit didn’...Read More

MIAMI — It arguably could have been considered an epic troll when the Miami Heat rolled out their Golden Oldies senior dance troop during the third quarter of Sunday night’s 113-107 victory at FTX Arena.

Joel Embiid finished with 38 points,12 rebounds and six assists. It was his 12th consecutive road game with 30 or more.

SAN ANTONIO — Doc Rivers and the 76ers can’t feel sorry for themselves.

They know the futility ...Read More