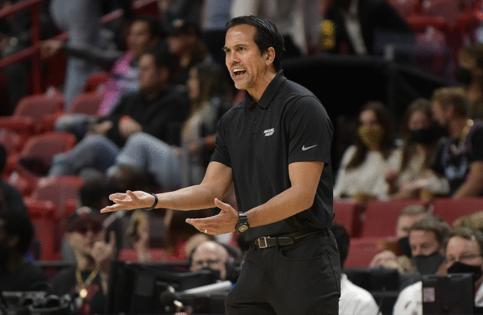 Spoelstra was specifically addressing this period with Bam Adebayo out for weeks following thumb surgery and with Jimmy Butler again dealing with the effects of a bruised tailbone, an injury that had him out for four games before Monday’s brief return in the 105-90 loss to the visiting Memphis Grizzlies.

Typically, Spoelstra would insist the Heat have enough when it comes to whatever remains of the roster, adamant that the system in place simply has to be better executed.

But lately, schematics based on the skills of Adebayo and Butler have not translated to these games when one or both are sidelined.

As somewhat of the last leading man standing, point guard Kyle Lowry said he is up to the challenges of recalibration on the run.

“It’s not hard. I mean, we got guys who are professional,” he said. “So, I mean, I don’t think we change it ‘til it’s like we’re going to run the flex offense. I mean we’re not going to that extreme.

Tyler Herro, who has yo-yoed between the starting lineup and bench, depending on Butler’s availability, said he appreciates the added burden on Lowry, who signed in the offseason to play alongside Adebayo and Butler, not in place of the two.

“Obviously they’re two guys who help us get settled, especially at the beginning of games,” Herro said of Adebayo and Butler. “We can throw the ball to either of them and they’ll create most of the actions and more of the offense for us.