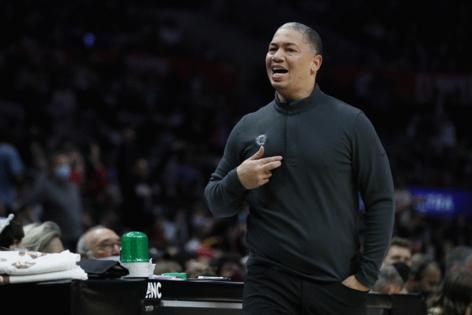 But what made Lue and other Clippers shake their head Monday, before and during a 102-90 win in Portland, were the times when trouble has emerged before plays can even begin. Cramped spacing born out of confusion. Players freelancing outside of the expected structure.

Six weeks into the season, it has happened frequently enough that it has become not so much random but a gratingly regular occurrence, with Lue counting sometimes 17 wasted possessions a game. In the second quarter of Saturday’s loss to Sacramento alone, Lue counted eight possessions when the Clippers couldn’t even begin their assigned play.

“I don’t think we’re good enough right now to play random basketball without getting to our spots, without pushing, pushing the pace, getting to our spots,” he said. “And then once you run to play, now you got to play after that play, and that’s what we got good at last year. So I got to do a better job with our team.”

Monday was supposed to be the opportunity for this offense to awaken. Portland already owned the league’s worst defense over the past month — and that was before injuries cost it its starting backcourt of Damian Lillard and C.J. McCollum, plus a top reserve guard and a promising forward. Sensing an opportunity, Lue injected more shooting into his lineup by starting guard Luke Kennard, a 42% 3-point shooter, for the first time this season.

Instead, it was another slog in a string of them, the struggles by the Clippers (13-12) to score equaled only by their difficulty stopping a Trail Blazers offense that virtually ran its entire offense through only guard Norman Powell and center Jusuf Nurkic. Facing few double teams, Nurkic scored a season-high 31 points, while Powell scored 29.

It took until the final two minutes to put distance between themselves and the Trail Blazers, when a dunk by Paul George was followed by a Portland turnover, another jumper by George and a free throw from Isaiah Hartenstein, after being caught in the neck by an elbow from Nurkic, drawing a flagrant foul. Given the ball back, the Clippers ran perhaps their best-executed possession of the night, when Hartenstein slipped a screen and was found for a dunk by a laser-guided Reggie Jackson assist. In barely two minutes, a two-point Clippers lead had grown to nine, and a badly needed win was secured.

With the exception of the Pacers, the opponent he has faced the least having left the team only in 2017, George entered Monday averaging more points against Portland than any other opponent in his career: 24.7 per game, while making just shy of 40% shooting of his three-pointers. He made none of his three three-pointers Monday but did make nine of his 15 shots inside the arc, and without his eight fourth-quarter points the Clippers might have left with another head-scratching loss.

Lue’s attempts to mix-and-match lineups to spark some sort of offensive rhythm was evident not only in his choice for the starting lineup but also his first substitution. Eric Bledsoe, the former starting point guard whose accuracy has ebbed and flowed, was not the first reserve to play when Kennard went to the bench midway through the first quarter; it was Brandon Boston Jr. instead.

By playing Boston alongside Ivica Zubac, George and Marcus Morris Sr., the Clippers bet on adding shooting and length while attempting to protect the rookie wing’s defensive shortcomings. Sure enough, Portland’s Tony Snell, almost exclusively a 3-point shooter, cut across Boston’s face for a basket. But then Boston answered with his second three-pointer in 23 seconds, and the Clippers led by seven.

At halftime, they’d made just 38% of their shots, 28% of their 3-pointers and turned 11 Portland turnovers into just eight points.

“He’s a professional, he wants to win, had no problem with it at all,” Lue said of Bledsoe’s reserve role. “He said whatever you want to do coach, I’m on board.”