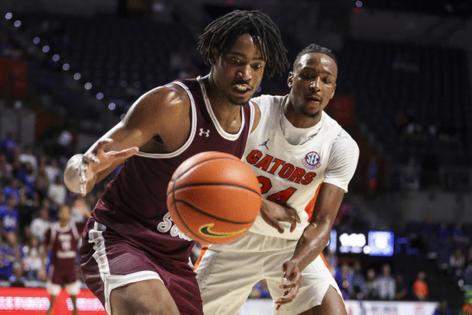 GAINESVILLE, Fla. — The grit, guile and experience that elevated the Florida Gators into the top 25 was nowhere to be found during a stunning loss Monday night to winless Texas Southern.

The Tigers (1-7) were a 23.5-point underdog under former LSU coach Johnny Jones but dealt the No. 20 Gators (6-2) their second consecutive loss.

The program’s fastest start since 2012-13 moved Florida to No. 14 in and raised expectations after the team began Mike White’s seventh season unranked. An uninspired loss Dec. 1 at Oklahoma, the Gators’ first road game, and a lackluster practice Sunday set the tone for their no-show against Texas Southern.

The Gators entered the night 26-0 against the Southwestern Athletic Conference but were completely outclassed.

“We just did a terrible job in every aspect,” said star center Colin Castleton, who finished with 12 points, 5 rebounds and 3 blocked shots.

The Tigers overcame 22 turnovers with 54% shooting — compared with 44% for the Gators — while holding a 46-23 rebounding advantage and outscoring Florida 42-26 in the paint.

”We were just a step behind for 40 minutes,” White said. “It was obvious we were disjointed.”

Meanwhile, Texas Southern found its stride after a tough start to the season.

The Tigers entered Monday having lost by an average of 12.7 points and were coming off defeats by 27 points at Louisiana Tech and 17 at BYU.