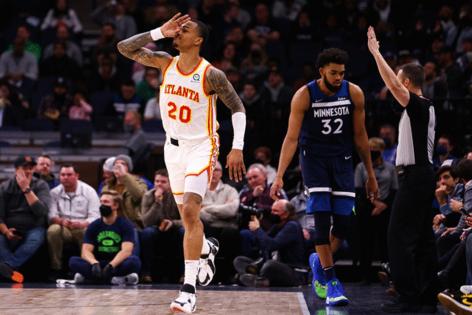 MINNEAPOLIS — Earlier this season, when the Timberwolves were going through a losing streak, Anthony Edwards remarked that once the Wolves had everybody back healthy again, they would be just fine. He was right.

Eventually, the Wolves got players back healthy and won seven of eight. But the reality of the life in the NBA is more complicated — not everyone who plays heavy minutes is always going to be available. The Wolves have had players in and out of the lineup over the last week because of injury and illness. As a result, they have now lost three straight, the latest coming 121-110 to Atlanta on Monday at Target Center.

This time, D'Angelo Russell joined the already injured Patrick Beverley on the bench because of right ankle soreness and the Wolves didn't have the defense to contain the Hawks nor the firepower to keep up with them, especially when the Hawks had all their big guns available and the Wolves did not.

Karl-Anthony Towns, who missed Friday's loss to Brooklyn because of an injured tailbone, had 31, 16 rebounds and about six hard falls on that tailbone. Anthony Edwards added 20 and Malik Beasley had 24 as he led a fourth-quarter surge, but the Wolves couldn't get closer than 10 down the stretch.

This young Wolves team doesn't have a large margin for error, and now they are finding out what happens when they have to try and compensate for the loss of important teammates on a nightly basis.

Atlanta set the tone for the kind of night it was going to be in the opening minutes in drilling its first four three-pointers and 9 of 15 in the first quarter. The Wolves didn't commit a turnover in the first and that helped them stay within single digits (down 33-24) despite hitting as many shots overall (nine) as the Hawks had threes.

Russell's absence hampered the Wolves not just on the offensive end but also the defense end. No player on the Wolves has as big a negative discrepancy between the Wolves' defensive rating when that player is on the floor and off as Russell. The Wolves appeared like they missed his ability to help gather the defense.

Timothe Luwawu-Cabarrot had nine in the first quarter while both Young and Danilo Gallinari had eight.

Atlanta cooled off from three-point range in the second quarter but the Hawks increased their lead to as many as 20. Young continued to get to the free throw line and had nine attempts by halftime. Towns didn't look comfortable most of the night as he labored to play through his injured tailbone that kept him out of Friday's game. He fell multiple times on that tailbone in the second quarter and would appear to have trouble getting up, but he trudged forward.

They would cut that to 11 in the third before Atlanta coach Nate McMillan called timeout to reorganize the Hawks, who then went on a 10-0 run and go back up 21.

The Hawks may have cooled down in the second quarter, but they found the fire again in the third, again hitting nine threes on 13 attempts. When the Wolves made a final push in the fourth behind Beasley's hot shooting, they had too steep a lead to overcome and never cut it to single digits.

NEW YORK — Here’s what Barclays Center and Los Angeles’ newly-minted Crypto.com Arena have in common: blockchain technology, and fans who cheer for the Lakers.

It sounded like the Nets were on the road and the ...Read More

DURHAM, N.C. — Injury and foul trouble rendered No. 9 Duke less than its best against Clemson on Tuesday night.

So the Blue Devils needed help from an unexpected place. Joey Baker provided it.

CHAMPAIGN, Ill. — Michigan State played one of its best games of the season in Friday’s victory at Wisconsin.

Four days later, it took the Spartans the better part of two halves before they came anything close. ...Read More

Tyrese Maxey stood near center court, hands on his head and eyes wide open as the New Orleans Pelicans’ Nikeil Alexander-Walker stepped to the line for a pair of third-quarter free throws.