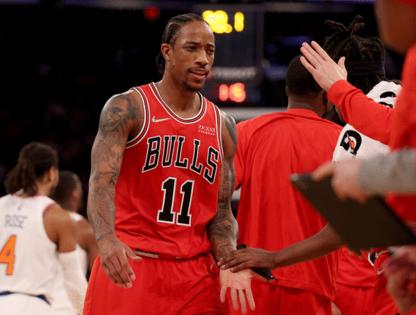 The Chicago Bulls are facing a potential COVID-19 outbreak after star forward DeMar DeRozan on Monday became the third player in the last week to enter the league testing protocol.

DeRozan returned one positive test, but the Bulls have not received enough additional results to firmly diagnose him as a positive case. Coach Billy Donovan said before Monday night’s game against the Denver Nuggets at the United Center that DeRozan participated fully in the morning shootaround with his teammates before he was pulled into isolation in the afternoon.

Donovan said it could take one to two days to confirm DeRozan’s status.

The Bulls have not determined if DeRozan can travel with the team to road games in Cleveland and Miami this week. DeRozan’s positive result came on the same day he was named Eastern Conference Player of the Week after averaging 30.3 points in three Bulls victories.

All three Bulls players must return two negative PCR tests within a 24-hour window to return to team activities.

The Bulls reinstated daily testing after White’s positive test. Donovan said players are being tested multiple times a day, and the coach got a test shortly before reporting to the United Center for Monday’s game.

The entire Bulls roster received both shots of the COVID-19 vaccine. Although it doesn’t prevent individuals from contracting the virus, the vaccine limits most of the symptoms and severity of the disease. Vučević and White both reported mild symptoms similar to a cold, and Vučević has played his best basketball of the season in the weeks since returning from isolation.

“It’s pretty clear just from a national standpoint — forget the NBA — that people that are vaccinated are getting COVID,” Donovan said. “I don’t think anybody was under the premise that just because you’re going to be vaccinated that you’d have no chance of getting COVID. That’s been proven pretty much to be the case that you still have the possibility.