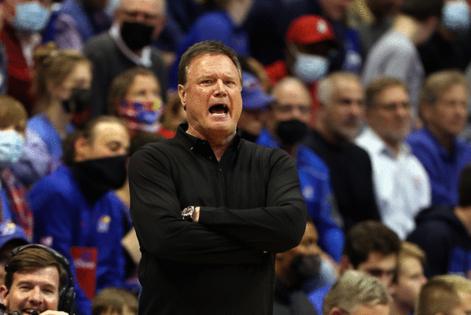 Christian Braun scored a career-high 31 points (with eight rebounds and four assists), Ochai Agbaji netted 23 points (with seven boards) and David McCormack added 15 points with a career-high tying 13 rebounds as the No. 8-ranked Jayhawks (6-1) upended the Red Storm (5-2), 95-75, on Friday night in a building that opened in November and is located adjacent to Belmont Race Track.

Remy Martin added 12 points for KU, which secured the victory in the third-annual Big East-Big 12 Battle, a challenge series that encompasses 10 games yearly played between teams in the two leagues. KU is now 2-1 all time in the Battle with wins over St. John’s and Creighton and a loss to Villanova.

Agbaji scored 16 points and had five rebounds, while McCormack scored 11 points with eight boards as KU led at halftime, 43-30.

Alexander scored 10 points, while Addae-Wusu had seven points the first 20 minutes. KU held standout guard/forward Champagnie to four points and five rebounds in the half.

McCormack had six points and three boards as KU led 13-2 after just four minutes. Braun had nine to go with McCormack’s six when KU led 21-8.

St. John’s trailed by 13 at halftime, but thanks to Champagnie, who cashed five 3-pointers to open the second half, cut the gap to 64-61 with 10 minutes, 40 seconds left.

Late in the game, St. John’s coach Mike Anderson received a technical foul for storming onto the court yelling at a referee. Alexander was also called for a technical as it appeared he bumped into a referee while complaining over the same call with 3:45 left.

KU is set to next meet UTEP at 7 p.m., Tuesday, at T-Mobile Center in Kansas City, Mo.