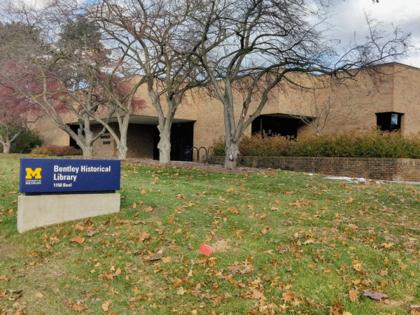 ANN ARBOR, Mich. — The Bentley Historical Library is a one-story, nondescript brick building in the University of Michigan's northeast corner. It's across the Huron River from the main campus, in a grove of trees tucked between a cemetery and biomedical engineering building, with leaves dancing in the autumn wind and a pile of snow next to the entrance.

It houses the university's archives as well as collections documenting the state's history across 70,000 square feet of storage area. There are research materials from Jonas Salk's time at Michigan developing a flu vaccine, personal papers from Michigan's governors, diaries from Civil War soldiers, letters from Michigan alum Dr. Jack Kevorkian and his campaign for physician-assisted suicide.

It also stores three cloth banners, rolled up, wrapped in plastic, tied with a white string, tucked into a shelf in a narrow corridor in the basement next to box 537/K.

The yellow (ahem, maize) and blue banners that commemorate trips to the 1992 and 1993 NCAA championship games and 1997 NIT title were still hanging from the rafters the last time Brian Dutcher was inside Crisler Center, the school's 54-year-old basketball arena. That was 1998, when he was a Michigan assistant coach.

When he walks in Crisler, 23 years later, for a practice with his San Diego State team ahead of Saturday's game against the 24th-ranked Wolverines, he'll look up and won't see them. They're gone, like melted snow.

'They done him wrong'

Mark Fisher, the son of Michigan head coach Steve Fisher, had just started his freshman year at Michigan in 1997 when he answered the phone on an October afternoon at the family's Ann Arbor home. It was Tom Goss, the athletic director, looking for his father.

His father was at the neighbors.