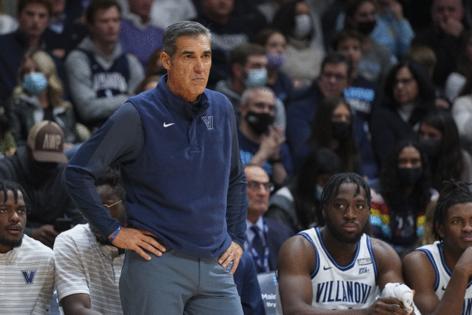 PHILADELPHIA — Villanova completed its Palestra stand Wednesday night with the same result in much the same fashion — timely shooting, fierce rebounding and a strong game from Collin Gillespie.

Gillespie scored a season-high 26 points, shooting 9 of 15 from the field with four 3-pointers, to lift the sixth-ranked Wildcats to a 71-56 victory over Penn before a crowd of about 6,200 inside the historic venue.

The Wildcats (5-2, 2-0 City Series), who defeated La Salle 72-46 in the same location on Sunday night, shot 45.6% from the floor and outrebounded the Quakers, 41-26. They recorded only seven assists — shockingly, none for Gillespie, their floor leader — but adjusted to what Penn was trying to do defensively.

Gillespie came into the game averaging 4.2 assists in his first six games. But he looked so comfortable in the flow of the offense, whether he was set behind the arc for a 3 or pounding the dribble inside and looking to score.

“They do a great job of just trying to take away threes; they don’t help off of anybody,” Wildcats coach Jay Wright said. “Guys who can get their own shot are effective because of the way they play. Collin and the experienced guys, like Slate (Slater), you’ve got to go off the dribble and be aggressive to score. They’re not going to come and help, you’re not going to get your teammates shots. You’ve got to look to score.”

Gillespie contributed three 3-point baskets in a six-minute stretch of the first half when Villanova sped away from Penn after the game was tied at 9. Gillespie sparked a 13-0 run with a 3-ball and a left-handed scoop layup. After the Quakers ended the spurt, Gillespie hit back-to-back 3s just 36 seconds apart to give the Cats their largest lead at 28-12 with 6:08 to play.

The Quakers cut the deficit to nine points on three occasions in the second half, the final time at 58-49 on Max Martz’s 3 with 5:17 to play. But Gillespie hit a fadeaway jumper from the baseline and a driving left-handed layup to get the visitors out of danger.

“I think that’s part of what makes him really good,” Penn coach Steve Donahue said. “They had seven assists tonight. We weren’t going to let them ping-pong the ball. I think he sensed that fairly early. That’s what makes him so good. He has that mental toughness that I think it something that we’re trying to get. He’s been such a facilitator this year but he really stepped up and played terrific.

After averaging nearly 18 points in his first five games, Justin Moore posted his second straight nine-point night at the Palestra, going 3 of 13 from the floor Wednesday night and making one 3-pointer in seven attempts.

But he did much more than score, pulling down 11 rebounds, and playing solid defense. He was credited with two steals but seemed to be everywhere on that end.

Dingle is one explosive guy

Dingle entered the game with a 19.5-point average but struggled in the first half, shooting only 2 of 9 from the floor and 1 of 5 from 3 for six points. He regrouped at halftime, however, and made half of 10 shots including four 3s and finished with 21.

“We need Jordan to do that from the get-go,” Donahue said. “Not that he doesn’t want to do that, but there’s not a sense of, OK, this is a really good opponent, how are we going to survive? The first 10 minutes of the game I thought, we’re feeling them out, and Villanova is going at us. We’ve got to get that comfort level from the start, especially with Villanova.”