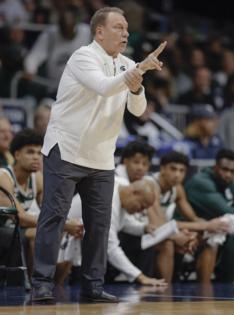 EAST LANSING, Mich. — Michigan State was back home for the first time in almost two weeks, and after a slow start, the Spartans gave the Breslin Center crowd plenty to cheer about.

Malik Hall scored 15 and was a perfect 3 for 3 on 3-pointers as No. 22 Michigan State put together a decisive run early in the second half to pull away for a 73-64 victory over Louisville in the Big Ten/ACC Challenge.

El Ellis scored 22 for Louisville (5-2), including 18 in the second half, while Dre Davis scored 15 and Malik Williams added 10 for the Cardinals.

It was a slow start offensively as Michigan State made only one of its first six shots.

But it wasn’t long before Brown got going to spark the offense. First, it was a dunk down the lane then the senior added a pair of 3-pointers which sandwiched one from Akins to give the Spartans a 19-15 lead.

The Cardinals responded quickly to tie the game at 19 then took a 22-21 lead on a 3-pointer from Jarrod West. The Spartans took control at that point, stringing together the next nine points as they hit three straight 3-pointers from Hall, Max Christie and Pierre Brooks to take a 30-22 lead.

Louisville trimmed the Michigan State lead to four late in the half, but Marcus Bingham Jr. scored the final four points of the half as the Spartans took a 36-28 lead to the locker room.

Michigan State started the second half slowly, much like it did the first, missing four of its first five shots as Louisville took advantage, trimming the deficit to 39-37.

The Spartans responded, however, as A.J. Hoggard got things going with a three-point play. He then found Akins in the corner for a 3-pointer and did the same with Hall as Michigan State put together a 13-2 run to push the lead to 52-39 with 12:14 to play. Another Hall 3 and a lob dunk to Bingham had the crowd on its feet as Michigan State extended its advantage to 57-41.

Two free throws from Walker put Michigan State ahead by 18 and capped a 20-4 run over four minutes that essentially put the game out of reach.

Louisville made a late push as Ellis scored 11 points in a row for the Cardinals, including hitting three 3-pointers as the deficit was cut to 67-56 with less than four minutes to play.

SEATTLE — Remember when Breanna Stewart talked with a fair amount of certainty about returning to the Storm next season?

“Seattle has always been my home,” the 27-year-old Storm star said back in September days ...Read More

NEW YORK — In those better times for the Knicks last season, which today seem further away than ever, coach Tom Thibodeau would often refer to Julius Randle as the team’s “engine.”

It was easy to interpret: a car ...Read More

Perhaps Tyrese Martin read his Twitter mentions at halftime and got angry.

After a two-point first half, Martin powered a dominant second half with 25 points to lead the UConn men’s basketball team to a 75-56 Big East ...Read More

NEW YORK — It was the same old story for the Knicks Thursday night:

The starters were brutal, and it took the bench to make it a game.

Julius Randle, Kemba Walker and company ran up a deficit that got to 24 points ...Read More

PHILADELPHIA — People hoping to see the 76ers move Ben Simmons before the Feb. 10 NBA trade deadline might be disappointed.

Sixers President of Basketball Operations Daryl Morey was asked how likely it is for Simmons to...Read More