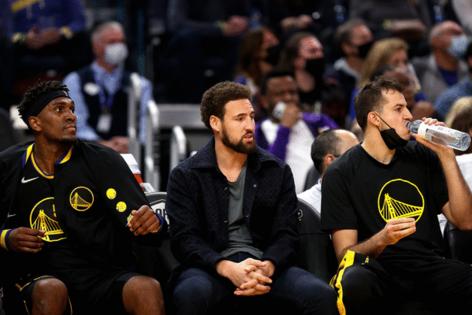 LOS ANGELES — While the Warriors took to the skies for a short road trip, Klay Thompson made the even shorter trek south to Santa Cruz by land. The avid boat captain gave it some thought but decided against sailing down the coast to the Warriors' G League affiliate.

Thompson followed up his first G League scrimmage with a full day of Santa Cruz Warriors practice Monday and another planned run of five-on-five Tuesday, while the NBA's Warriors face the Phoenix Suns in the first of a highly anticipated pair of games this week with their top competition in the Western Conference.

With another potential playoff preview looming on Christmas Day, could Thompson be back by then? It's right in line with the vague timeline put forth by Thompson and Warriors' team doctors. For now, he's made enough progress to join Santa Cruz's practices and scrimmages while the Warriors are away from home.

Living up to reports of recent stages of his rehab, Thompson has looked like his old self during his first two days in Santa Cruz.

He showed off his signature shot by hitting the first 18 attempts — more or less — of the first shooting drill he participated in, Cooper said. His explosiveness was on display during a fastbreak drill, when a teammate passed to him in the lane in transition and he rose to the rim for a dunk. And he even gave a glimpse of the future by sharing some in-sync off-ball movements with a capable teammate.

"Right away, you can see the level that he brings. He was great, jumping in everything today practice-wise," Cooper said. "All the drills, all the defensive drills, he's really getting after it. ... Everything we did was full 100 percent. There was no holding him back. He was totally live."

The rehab is over. Now, it's about getting into game shape.