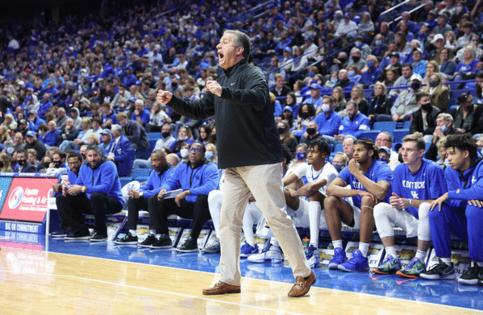 Even by the modest standard set by Kentucky’s home schedule so far this season (average margin of victory 28.8 points), Central Michigan paled by comparison. Going into this week, the average Ken Pomeroy rating for opponents in UK’s current span of seven straight home games was 269. Incidentally, that’s where Pomeroy ranked the New Jersey Institute of Technology.

Pomeroy ranked Central Michigan at No. 315, which was the worst rating of the seven opponents in this “tune-up” portion of the schedule.

Kentucky did its own crunching from the start. UK made its first six shots and led 13-5 less than four minutes into the game.

The sharp-shooting included three-pointers by Keion Brooks and Sahvir Wheeler, two players that came into the game having combined to make five of 21 shots from beyond the arc this season.

Wheeler’s early three-pointer put UK ahead 16-5 moments before the first television timeout at the 14:56 mark.

The timeout did not have an impact. Central Michigan made only five of its first 21 shots en route to a 33.3-percent shooting half (10 of 30).

Life without Kevin Durant has proven to be a bit more difficult than the locked-and-loaded Nets expected.

Without Durant — expected to be out until at least the All-Star break with a sprained MCL in his left knee — ...Read More

MIAMI — The preferred approach when your starting point guard and Sixth Man Award candidate are out probably is not to then see your leading man ejected.

But that is where the Miami Heat stood late in Wednesday night’...Read More

ATLANTA — Everything was going just fine for the Timberwolves early in their 134-122 loss to the Hawks.

The Wolves were rolling offensively and had built a double-digit lead that they maintained at halftime.

Then in ...Read More

PHILADELPHIA — With the NBA trade deadline three weeks away, Doc Rivers was asked Wednesday what the 76ers need to acquire to ensure a deep postseason run.

“Right now, when we’re whole with what we have, we’ve ...Read More

NEW YORK — The Nets have lost two things with Kevin Durant out for at least a month and a half:

1) Their most versatile defender; a perennial Defensive Player of the Year snub with the myriad ways he impacts a game on ...Read More

NEW YORK — It’s impossible to plot the future of Kemba Walker’s balky left knee. And nobody understands that better than Walker, which is why the 31-year-old couldn’t make declarations about his availability for ...Read More