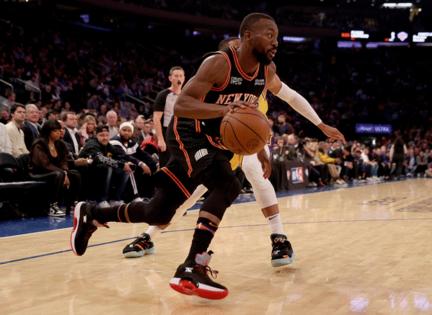 Alec Burks is in the starting lineup and Kemba Walker is out of the rotation.

Tom Thibodeau announced the change amid continued struggles from the starters, and with Tuesday’s game in Brooklyn looming.

The coach cited the need for added size by inserting Burks, who had great success starting in Saturday’s victory over the Hawks while Walker rested.

“I just don’t like the way we’ve been trending, the inconsistency of our team. I want to get bigger,” Thibodeau said. “I want our defense to get bigger at the point of the attack. So basically that’s it. You got to do something different.”

Walker has struggled this season – especially defensively – but removing him from the rotation is controversial because of the point guard’s stature as a four-time All-Star. He was signed in the offseason for $18 million, and touted as a gamechanger while the team and media highlighted his homecoming.

But Thibodeau said he didn’t want to play Walker on a second unit with two other guards – Derrick Rose and Immanuel Quickley — and informed the 31-year-old before speaking to the media Monday.

He added that Walker is out of the rotation “as of right now.”

The Knicks have been outscored by 122 points this season when playing Walker, who owns the worst defensive rating on the squad and also is managing an arthritic knee. Julius Randle, who has struggled this season along with the starting unit, said he “trusts” Thibodeau’s decision.

“He’s gonna do what he feels is best for the team. It’s our job to go out there and play,” Randle said. “And he felt like it just gave us more size and hopefully just more consistency to the starting unit. So, Kemba’s been great, great in the locker room, great teammate, all that. So, he’ll still do the same. But coach just felt like 20 games in, he didn’t wanna wait and switch things up.”

Last season, Thibodeau was hesitant to remove Elfrid Payton from the lineup – waiting until the playoffs – but pulled the trigger quickly with Walker.

”We’re 20 games into it. And one of the things that stood out to me was the inconsistency of the team,” Thibodeau said. “Those are tough decisions. You think it through. You look at the film. You look at the numbers. And then you also have to think about how can we help the starters more get into rhythm. And it doesn’t fall on one guy. It’s a team sport. As I said, I liked the way we played in Atlanta. I want to take a look at that. I think it’s our best chance. I think getting back to size.

“The difficult part is who Kemba is. He’s a top of the line guy. Great character and he’s had a heck of a career. So, but as I said. You think about all the different possibilities. Right now, you are basing it on performance. The way Quick has played and Derrick has played, and the way the second unit has played, I don’t’ want to disrupt it.”