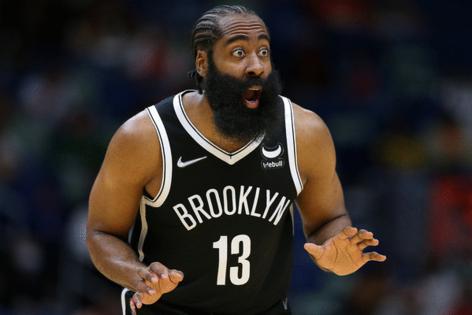 Last season, the Nets had a revelation: Move Kyrie Irving off the ball, and let James Harden’s brilliance as a playmaker dictate the Brooklyn offense.

Harden’s hamstring is no longer hampering him. Irving’s absence, however, is.

That’s because Harden is still trying to pick his spots. He’s a shoo-in Hall of Famer because of his abilities to read a defense and make the right play. In seasons past, the right play was a near-even balance of distributing to his teammates or scoring, either via side-step or step-back three, a euro-step that splices the defense on the way to the rim, or a trip to the foul line.

Harden put his desire to score on the backburner last season because he had two all-world scorers in Irving and Kevin Durant willing to shoulder the load. Now, however, his team needs him to score more.

Then there’s the Harden who prioritizes the pass over the shot, the Harden who is an all-world playmaker and passer but sometimes tentative when looking for his own shot.

Harden’s teams have been most successful when he’s the scoring machine who is unguardable at every point of the basketball court, but Durant says the Nets can beat teams no matter which version of his co-star shows up to play.

“I just think we can do both,” Durant said. “We can play around both sides, both variations of James – scoring and facilitating. So, 14 assists, 13 rebounds, we’re going to need that. We definitely (want him) to shoot the ball better, but I like his aggressiveness.”

The Nets trust Harden, regardless of how he plays. He’s one of few players in NBA history to challenge Tiny Archibald’s standing as the only player to ever lead the NBA in scoring and assists in a single season. He’s a perennial MVP candidate, having won the award in 2018. There’s a reason the Nets traded the kitchen sink for a player of his caliber: He has the ability to take over a game when he has it going.

So far, the Nets are still waiting for him to crank the engine, and if the engine has been cranked, it’s sputtered this season.

His teammates aren’t losing faith. They know their best chance at realizing their championship dreams lies with him supporting Durant as the superstars that have dominated the league for more than a decade.

They also know Harden is as smart of a player there is in the NBA. Irving around or not, he’ll figure it out, even if it looked iffy for a night against the Suns.

“I guess you could say (he looked passive) tonight, but James is great,” said DeAndre’ Bembry. “We trust James in every way, so I know he’ll get back to it. But (questioning) him making a play? Nah. He sees the game better than others. That’s the last thing we’re worried about.”

The Kings guard was in his home state Saturday night, about 90 miles from Oshkosh North High School, where his jersey was retired in a ceremony Friday. With his parents at Saturday’s game with ...Read More

BOULDER, Colo. — It was snowballing inside the old basketball barn, a once-quiet arena rocking. With one empty possession after another for UCLA, the decibel level soared. Students behind one basket furiously waved white...Read More

The Horned Frogs had the best road victory in program history, knocking off No. 15 Iowa State, 59-44, at Hilton Coliseum in Ames.

Lakers star Anthony Davis, who has been recovering from a sprained left knee ligament, has been upgraded to questionable for Sunday's game in Miami and will be a game-time decision, the team said Saturday.

AUSTIN, Texas — Talk about a red-hot start. All five Texas starters opened Saturday's game at the Erwin Center with a bucket on the Longhorns’ first five possessions against Oklahoma State.

MANHATTAN, Kan. — Bill Self tried to focus on the Kansas men’s basketball game against Kansas State and nothing else on Saturday afternoon, just two days after the death of his dad, Bill Self Sr.