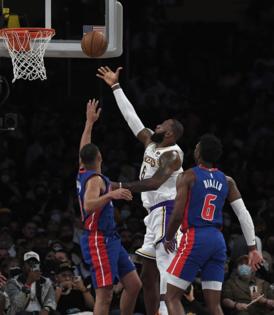 The night always starts the same, highlights from the Lakers’ star-filled past projected onto an oversized white sheet before it drops to the floor.

This curtain drop, though, felt as if it could have been followed by a giant shoe.

Under normal circumstances, a visit from one of the worst NBA teams wouldn’t elicit any feelings of dread. But this season, these Lakers have been anything but normal — a team capable of talking about 10-game winning streaks with a straight face despite having barely won 10 of its first 21 games.

No, the moments before tipoff at the Lakers’ home arena are more tense, another stinker performance moving the team closer to some fundamental changes.

The Lakers avoided disaster, albeit barely, beating the Pistons 110-106 in a game in which they led by as many as 19 Sunday night.

The crowd howled as the streamers fell and as Randy Newman pounded the keys, but this felt more like a cause of brief exhalation and not celebration.

The stakes shouldn’t feel this high, not nearly a month before Christmas, but the Lakers’ struggles over the first quarter of the season have made every 48 minutes feel like some referendum on the team’s championship chances.

With chatter among league insiders about the security of Frank Vogel’s job, nights like Sunday when the team is expected to cruise can be the scariest.

“When they’re not performing at a high enough level, you challenge them,” Vogel said before the game. “We’ve challenged them again, they’ll continue to be challenged to push to play at a higher level.”

For the longest stretch of the season, the Lakers got there — 16 straight points in the third quarter to turn potential upset into a desperately needed double-digit lead. But a season isn’t saved in a night, and the Lakers’ sure wasn’t Sunday.

SAN JOSE, Calif. — Caren and Mike Andrews stuck to a routine. Family dinner. Every night. Everyone at the table.

For their two daughters, Malika and Kendra, family dinner became more than a nightly ritual. The dinner ...Read More