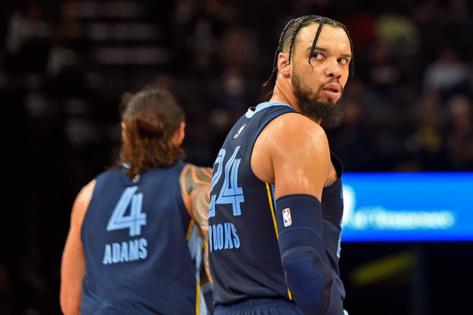 Interim Kings coach Alvin Gentry didn’t like what he saw when his starters came out looking lethargic in the opening minutes of Sunday’s game against the Memphis Grizzlies. When they did it again to start the second half, Gentry decided he had seen enough.

Gentry benched his starters less than three minutes into the second half. He was looking for a spark from his bench, but his backups didn’t fare much better in a 128-101 loss to the Grizzlies at FedExForum.

Buddy Hield had a team-high 14 points for the Kings (8-13), but he made just 5 of 17 from the field and 1 of 9 from 3-point range. Terence Davis had 13 points. De’Aaron Fox had 12 points on 4-of-12 shooting for the Kings, who were coming off back-to-back wins over the Portland Trail Blazers and Los Angeles Lakers.

The Grizzlies led by 24 at the half and extended their lead to 28 early in the third quarter, prompting Gentry to call a timeout. Gentry made mass substitutions, replacing Fox, Tyrese Haliburton, Davis, Chimezie Metu and Alex Len with Hield, Davion Mitchell, Louis King, Marvin Bagley III and Damian Jones.

“We started the third quarter and I didn’t think we had the kind of activity I thought we should have,” Gentry said. “And then after a couple easy baskets here or there, I decided it was time to try somebody else.”

The Grizzlies shot 48.1% from the field while holding the Kings to 34.0%. Memphis also amassed a 68-49 rebounding advantage.

“When you look at the stat sheet, all the things say that we had no chance to win the game,” Gentry said.

NEW YORK — Here’s what Barclays Center and Los Angeles’ newly-minted Crypto.com Arena have in common: blockchain technology, and fans who cheer for the Lakers.

It sounded like the Nets were on the road and the ...Read More

DURHAM, N.C. — Injury and foul trouble rendered No. 9 Duke less than its best against Clemson on Tuesday night.

So the Blue Devils needed help from an unexpected place. Joey Baker provided it.

CHAMPAIGN, Ill. — Michigan State played one of its best games of the season in Friday’s victory at Wisconsin.

Four days later, it took the Spartans the better part of two halves before they came anything close. ...Read More

Tyrese Maxey stood near center court, hands on his head and eyes wide open as the New Orleans Pelicans’ Nikeil Alexander-Walker stepped to the line for a pair of third-quarter free throws.