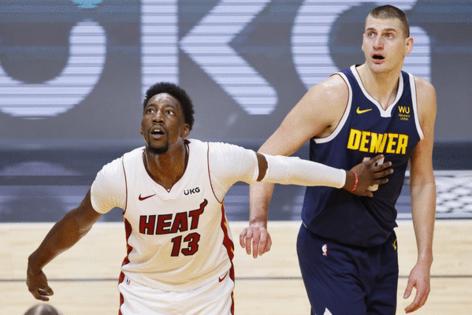 Yes, Monday will mark the first meeting with the Denver Nuggets since push from Heat forward Markieff Morris came to shove from Nuggets center Nikola Jokic on Nov. 8 in Denver.

The incident left Jokic suspended one game and Morris fined $50,000, yet to return from the whiplash sustained in the incident.

In previous eras, Round 2 would have been fait accompli. But this no longer is Lakers-Celtics with Rambis vs. McHale, or Jordan's Bulls vs. the Bad Boy Pistons, or even what still remains vivid closer to home, Riley Heat vs. Van Gundy Knicks.

So what to expect?

Former NBA coach and executive Stu Jackson, who spent 13 years in the league office, with a significant portion of that tenure as dean of discipline, offered his thoughts this past week to the South Florida Sun Sentinel.

“In short,” Jackson, now a Big East executive, said, “the officiating crew will be on high alert. Not only because of the matchup between the two of them, but also just the tone of the game, early on, which I suspect the referees will establish a mindset that they’re not going to tolerate any BS.

“The last thing an official wants to do is have something break out in their game that doesn’t have to do with the game.”

With all involved having gone to school, Jackson said, on what transpired in those closing minutes of the Nuggets’ blowout victory in the first of the teams’ two meetings this season.