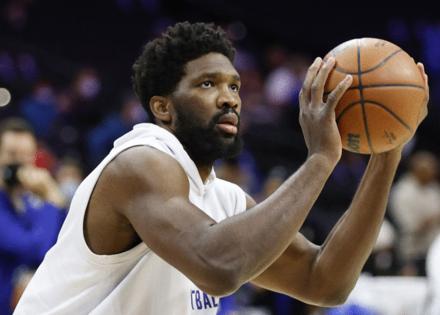 A necessary step in the maturation of this Wolves team involves the ability to shake off a bad performance — and do so when short-staffed without injured guard Patrick Beverley.

The Wolves dusted themselves off and held on for a 121-120 double-overtime victory over Philadelphia despite relinquishing a 20-point lead in the second half.

Karl-Anthony Towns, who entered the night questionable because of a right index finger injury, had 28 points for the Wolves before fouling out while D'Angelo Russell had 35 points. Joel Embiid scored 42 points for Philadelphia.

The 76ers finally tied the score for the first time since 0-0 on a Matisse Thybulle dunk with 3 minutes, 59 seconds to play. Both teams traded empty possessions until Embiid canned a 3-pointer with 1:55 to go.

A Towns put-back brought the Wolves within 98-97 and Anthony Edwards drilled a 3 to put the Wolves ahead 100-98 with 1:11 to play. After Embiid hit one of two free throws with 1 minute left, Towns fouled out with 18.5 seconds to play on a put-back attempt from Tobias Harris, a call Towns with which Towns disagreed. Harris hit one of two free throws to set up the Wolves' final shot, an Edwards 3 that missed.

The night started well for the Wolves as they looked like the more energized team despite playing on the second night of a back to back.

Edwards was more aggressive attacking the basket in the first quarter and had 12 first-quarter points.

Towns also got off to a sharp start despite Embiid's presence. Towns had the Wolves' first seven points of the night as the Wolves opened an early lead that grew to 35-20 by the end of the quarter. The Wolves outrebounded Philadelphia in the first 16-5 with Jarred Vanderbilt grabbing six of those.

Coach Chris Finch also decided to shake up his rotation with Beverley out and instead of subbing Jordan McLaughlin in for Russell, Finch went with rookie Leandro Bolmaro, who was playing his first non-garbage time minutes of the season.

Philadelphia cut into the Wolves' lead to start the second as Edwards and Towns rested. A 10-2 run to start the quarter brought the 76ers with 37-30, but the Wolves steadied themselves, clamped down defensively and held the 76ers to just 11 points the rest of the quarter.

After Towns and Edwards re-entered, the offense returned and the Wolves entered the locker room up 56-41. They had 34 points in the paint to Philadelphia's six at the half.

The Wolves increased their lead to 20 to start the third before their offense went stagnant and Vanderbilt went to the bench with four fouls. Slowly but surely, the Wolves' lead began to disappear.

A 15-3 run in which Danny Green and Seth Curry started knocking down open 3s pulled Philadelphia within six. The 76ers wouldn't come all the way back, but as the quarter wore on, Philadelphia was wearing out the Wolves, who shot just 6 of 20 with five turnovers in the third.

The 76ers got within 72-70 by the start of the fourth. The Wolves came back alive with Vanderbilt back in as he hustled to get them turnovers and second-chance opportunities. With Russell hitting some shots, the Wolves built their lead back to 88-76 with 8 minutes, 20 seconds to play. Embiid checked back in for Philadelphia and the 76ers cut the lead to 88-84 to build to the dramatic finish.