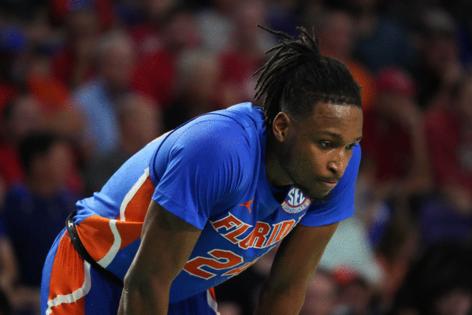 FORT MYERS, Fla. - Put Ohio State and Florida in the same gym and you're bound to get fireworks.

Wednesday night in the championship game of the Fort Myers Tip-Off, the Buckeyes and No. 23 Gators did not disappoint. Tyree Applebee's 3-pointer at the buzzer gave Florida (5-0) a 71-68 win against the Buckeyes (4-2).

Ohio State would take the lead with 2:37 left in the first half and hold it until a Colin Castleton free throw with 2:15 put the Gators ahead, 66-65. The Buckeyes had led by as many as 10 earlier in the game but couldn't put it away as Florida kept chipping away.

E.J. Liddell's free throws with 1:56 answered Castleton, pushed the Buckeyes ahead 67-66. Zed Key would add a free throw with 47.1 left, but Florida tied it on a slam dunk from Anthony Duruji, took a Liddell miss up the court and got the winner from Applebee to set off a celebration.

Florida did some of its heavy lifting at the free-throw line, where the Gators were 23 for 33 compared to 13 for 20 for Ohio State.

The Buckeyes committed a season-high 18 turnovers that Florida turned into 22 points and allowed the Gators to turn 16 offensive rebounds into 16 points.

When Jimmy Sotos hit the deck, pushed a loose ball to Zed Key and saw his teammate slam it home to give Ohio State a 47-37 lead, Ohio State seemed to be rolling. And when Florida turned it over on the next possession and called timeout with 12:58 remaining, Buckeyes fans got an O-H-I-O chant going around Suncoast Credit Union Arena.

But on the next possession, Meechie Johnson Jr. drove under the basket, ran out of room and threw the ball away. At the other end, CJ Felder finished a behind-the-back pass from Colin Castleton while being fouled by Jimmy Sotos, and he hit the free throw for a potential six-point swing.

It was the first of four straight Ohio State possessions that ended in turnovers. It opened the door for the Gators, and as the fouls picked up on the Buckeyes Florida pulled closer with help at the line. On one possession, Florida's Phlandrous Fleming Jr. got two free throws for a foul while he went for an offensive rebound and two more for a technical foul assessed to the Ohio State bench.

That pulled the Gators within 51-49 with 9:03 to play, but on the next possession E.J. Liddell was fouled and hit two free throws. They were the first attempts of the half for the Buckeyes as Florida was 10 for 13 to that point.

Picking up where they left off in this same gym Monday night, the Buckeyes built an 8-2 lead and led 13-6 on an E.J. Liddell jumper with 14:32 to play before everything came to a grinding halt. As Florida began to uses its athleticism and speed to harass Ohio State, particularly on the perimeter, the opportunities dried up and the offense stagnated.

Liddell would hit a free throw four minutes later to break a scoreless drought, but Ohio State wouldn't connect on another field goal until - who else? - Liddell scored on a leaner in the paint with 8:09 left in the half to put the Buckeyes ahead 17-15.

That would be it for a while on the offensive end as Ohio State would turn it over on four straight possessions and five of its next six before Kyle Young drove, scored through contact and hit the free throw with 4:21 left. That cut into a 22-17 Florida lead, its largest of the game to that point, and started a hot stretch to close the half. After scoring 13 points in the first 5:28 and only four in the next 10:11, the Buckeyes would get to a 30-26 halftime lead by scoring 13 points in the final 4:21.

It was nearly an 8-0 run to close the half, but CJ Felder dunked a 3-point miss from Myreon Jones at the buzzer to give the Gators the final bucket.

With Gene Brown III back home in concussion protocol and Jamari Wheeler hampered by two fouls in the first three minutes, Louisiana transfer Cedric Russell logged six first-half minutes and hit his first 3-pointer of the season to give Ohio State the lead at 25-24 with 2:37 left in the half.