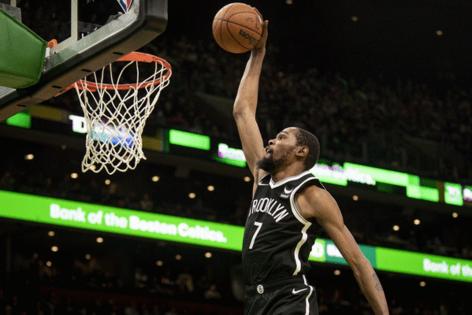 BOSTON — This is what a win is supposed to feel like for a championship contender.

Dominant. Unquestioned. Merciless, with no hope of a comeback.

The Nets’ 123-104 win over the Boston Celtics was all that and a bag of chips — or a side of mac-and-cheese, plus a dollop of mashed potatoes and a forkful of stuffing. Brooklyn’s landslide victory left no doubt in the minds of any of the rabid fans who packed the TD Garden on Wednesday night.

The Nets are in a different stratosphere than their Atlantic Division counterpart Celtics.

It’s not even close.

Call it another year for the Celtics knocking on a championship door the Nets have slammed shut. Brooklyn didn’t need Kyrie Irving (unvaccinated), Joe Harris (left ankle sprain), Bruce Brown (hamstring), or Nic Claxton (conditioning) to take care of business in Boston on Wednesday. And if the Nets are at full strength in the playoffs, or whatever full strength is without Irving, the Celtics will be the least of Brooklyn’s worries.

This, of course, is how it’s supposed to be for a team with the Eastern Conference’s best record, a team with tangible dreams of winning a championship, regardless of whether or not Irving is able to suit up in a Nets jersey this season.

The Celtics had won eight of their last 11 games before welcoming the Nets onto the parquet floors. Yet Kevin Durant set the tone before the opening tip, when he pointed at and trash talked former Nets assistant and current Celtics head coach Ime Udoka from midcourt.

Udoka said he would lean on what he learned from helping coach the Nets on the sidelines last season. All that knowledge went out the window once his Celtics found themselves down 29 and subject to boos from their own faithful fans.

At least until the fourth quarter when the Celtics found some life. With Durant, LaMarcus Aldridge and DeAndre’ Bembry all on the bench, the Celtics were able to cut the Nets’ lead down to as few as 13.

The new and improved Nets defense made life difficult for Jayson Tatum (15 points, 4-of-16 shooting), Jaylen Brown (13 points, 5-of-15 shooting) and Dennis Schroder (10 points, 3-of-10 shooting), but Marcus Smart’s irritating defense and timely shot-making reinvigorated the Celtics’ crowd in the fourth.

And every time the crowd got loud, Durant found a way to silence them.

Whether it was a pull-up jumper or a hand-changing, body-contorting finish at the rim, the Nets’ star found ways to keep his team steady down the stretch. He finished with 21 points on 8-of-16 shooting from the field, and found other ways to score when his 3-point shot (0 of 4) wasn’t falling.

When the Nets didn’t ride Durant, they rode Mills, who has emerged as Brooklyn’s premier 3-point shooter. Mills shot 7 of 10 from downtown and finished with 23 points. He is now shooting 50% from 3-point range on the season, on pace for the most efficient shooting season of his career.

Nash opted to sit Blake Griffin, who has not performed up to par in his role as a starting center for the Nets this season. Instead, Aldridge got the start and responded with 17 points and nine rebounds on a flurry of mid-range jump shots and post-up finishes over smaller Celtics defenders. Nash rode veterans Paul Millsap and James Johnson in the reserve role, and the two closed the fourth quarter when the Celtics tried to go small.

Nets rookie Cam Thomas also got an early nod, logging 22 minutes after his breakout game against the Cavaliers. He shot 0 of 5 from downtown but scored 11 points on drives to the rim and played scrappy defense all night long.