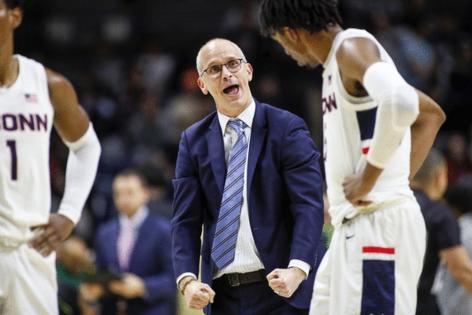 PARADISE ISLAND, BAHAMAS — The UConn men’s basketball team knew its Battle 4 Atlantis tournament opener Wednesday against No. 22 Auburn would be the toughest test yet.

Little did they know that test would look like a double-overtime instant classic in which the No. 19 Huskies had to fight through three of their starters fouling out, squandering a 15-point lead and hanging on in OT to come away with the 115-109 victory for one of the program’s biggest wins under coach Dan Hurley.

It was UConn’s first ranked win since March 5, 2020 versus Houston. Hurley is now 4-11 against ranked teams as head coach at UConn.

The Huskies (5-0) meet Michigan State on Thursday at noon in their second game of the tournament.

“The program’s been through a lot. We’ve had to climb these last couple years. We were horrible a couple years ago, and we’re finally climbing this mountain and getting good again and starting to resemble UConn again,” Hurley said.

“And we’re not going to let you knock us off that easily when we’re trying so hard to get this thing back to where UConn should be. So you’ve got to try to kill us to beat us.”

Sophomore forward Adama Sanogo led the Huskies with a career-high 30 points, his third game of the season with at least 20. Graduate students R.J. Cole and Tyler Polley added 24 apiece, Polley on 6-of-9 shooting from 3 and the clutch trey at the end of regulation to send it to overtime. Freshman Jordan Hawkins was also a bright spot with a career-high 16 points (5-of-7 shooting, 3-of-4 shooting on 3s).

The Huskies managed to win despite losing Tyrese Martin, Andre Jackson and Isaiah Whaley at the end of regulation, the first overtime and the second overtime, respectively, after fouling out.

“That was a special game, that was a special nonconference game,” Hurley said. “The amount of shotmaking and playmaking and athleticism and skill and will, obviously two teams that are going to have the potential to have a great, great year and can see each other in the NCAA Tournament.”