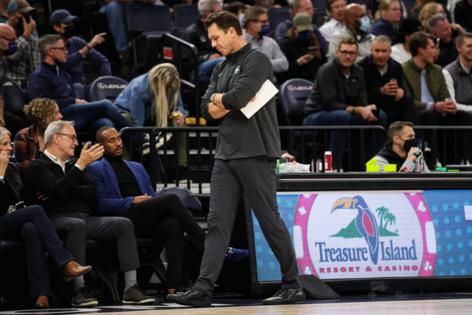 The Kings' timing behind the firing of coach Luke Walton wasn't brimming with logic.

Nor did Monday's loss to the Philadelphia 76ers do much for the case Walton was the team's biggest problem. It's all deeper than that.

The Kings dropped an embarrassing game, at home, to the depleted 76ers without Ben Simmons (personal reasons), Joel Embiid (COVID-19 protocols), Seth Curry (back stiffness), Danny Green (hamstring) and Tobias Harris (hip). It should have been a blowout the other way, taking care of a tired team with nine available players on the fifth game of a six-game trip. That's what a competent team with playoff aspirations would have done.

Instead, the Sixers won 102-94 while the Kings wilted with a miserable 12-point fourth quarter in which Philadelphia outscored Sacramento by 13 points.

Somehow, there were no King fan throwing up on the court as there was Saturday. Even though this latest loss was more deserving.

"The bottom line is they kicked our ass," interim coach Alvin Gentry, coaching his first game in his new role, said afterward.

The Kings lack spirit, an offensive identity, a star willing to rise to the moment, a long-term plan and proper expectations from those in charge. There are 64 games remaining but the season has the feeling of circling the drain as the Kings sit at 6-12. How'd they win six? It's a miracle.

General manager Monte McNair reiterated after the team fired Walton on Sunday the expectation was to end the 15-year playoff drought. Having that type of urgency has meant punting on a long-term plan while trying to Scotch-tape together a roster that's weak on the wings and heavy on points guards. Worse yet, the entire roster struggles together.

De'Aaron Fox, who had a respectable stat line, was minus-17, and didn't play like the All-Star the Kings need him to be late in the game. Harrison Barnes, the dependable veteran, scored just 10 points and was also minus-17 in 36 minutes.

Firing Walton didn't spark the team. There was no renewed sense of energy. No new fire. No urgency. It was the same story that has seen the Kings drop eight of nine games.