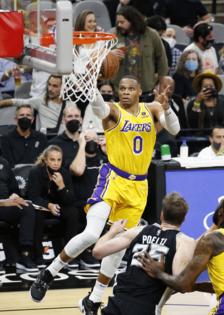 So even with a back-to-back game Wednesday night at Oklahoma City, Lakers coach Frank Vogel said James will be listed as “questionable” for that game and will be day to day going forward.

James missed 26 games last season because of a right ankle injury, an injury the forward said didn’t completely heal until the summer. Vogel said this current ankle injury is the “same ankle,” but a “different spot” and a “different injury.”

“Going to see how he feels,” Vogel said. “He’s just day to day and he’ll get evaluated again tomorrow and see what the soreness is like and make a decision then.”

That left James on the Lakers bench wearing a gray sweatshirt, gray hat and dark gray shorts, giving instructions and watching his other two stars, Anthony Davis and Russell Westbrook, carry the load in his absence during a thrilling 125-121 overtime victory over the Spurs.

Davis had a scary moment when he went down late in the fourth quarter with a left knee injury, but he still was a force with 35 points, 17 rebounds and four blocks in 42 minutes.

Westbrook came up two assists short of his first triple-double with the Lakers, producing 33 points, 10 rebounds and eight assists in 40 minutes.

Davis said, “Yes and no,” when asked whether he and Westbrook made it a decision to carry the Lakers with James out.

“I mean, just consciously, the Big Three and one is out so we kind of have to pick up that slack,” Davis said. “But we never say, ‘All right Russ, it’s on me and you tonight.’ Team never said it. It’s just something that kind of happens. But I told Russ, I said, ‘whether I play, Bron play, we don’t play, it doesn’t matter. You still got to be yourself.’ And he did that tonight. The way he played tonight was incredible. And we need that from him every night, no matter if Bron is playing or not.”

When the game hung in the balance in the overtime, Davis and Westbrook stood tall, combing to score 10 of the Lakers’ 11 points to help them even their record at 2-2.

Westbrook had six points in the overtime, including a dunk that had his teammates yelling from the bench.

“Especially with Bron being out, we understand that with that comes the responsibility making guys around us better,” Westbrook said. “And tonight, I thought AD did a great job of just being aggressive all night, miss and makes, finishing well around the basket. He was big for us tonight.”

Davis was scrambling for a defensive rebound late when he fell to the court clutching his left knee with 32.2 seconds left and the score tied 114-114 after colliding with Spurs guard Dejounte Murray.

He eventually was helped up, walked around for a few minutes and returned to the game. He scored twice in the overtime, his put-back that gave the Lakers a 123-121 lead his biggest basket of the game.

“It’s like a little stinger,” Davis said. “A little stinger and then I started moving and it kind of went away. I kept playing. Still felt it a little bit. But finished the game and I’ll see how it is when I wake tomorrow.”

Malik Monk started in place of James, and he provided some timely outside shooting.

Update: The Lakers and Thunder will be on the second night of back-to-back games, with Oklahoma City hosting Golden State Tuesday night. The Thunder were winless (0-3) before facing the Warriors. The Thunder have just two players averaging double figures, Shai Gilgeous-Alexander (20.0) and Mike Muscala (11.0). The Thunder are ranked 29th in the NBA in scoring, averaging just 93.3 points per game.