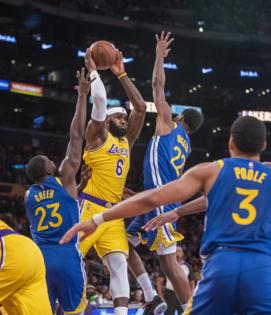 James injured the ankle in the first half of the Lakers’ win Sunday against the Memphis Grizzlies. He hit the court after getting his leg rolled into and said he initially thought “not again” before he was able to continue playing.

“It’s a little sore right now, and obviously I think it’s gonna be a little sore tomorrow when I wake up,” James said after the win.

He missed 26 games last season because of ankle problems that carried over into his offseason before he proclaimed himself healthy before the start of this year.

The Lakers play in Oklahoma City on Wednesday, with James’ status for that game unclear.