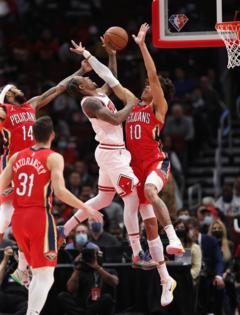 A wave of nostalgia cascaded over me Friday night at the United Center while watching the Chicago Bulls pound the New Orleans Pelican s in their home opener.

It was 30 years ago this week that the Bulls were playing an exhibition game in the New Orleans Superdome, where 31,278 fans watched Michael Jordan and the defending NBA champions take on the Denver Nuggets.

The Bulls were coming off their first title, and the pregame topic of conversation in the locker room was whether Chicago was evolving from a Bears town into a Bulls town five years after the Bears’ Super Bowl XX win.

“I think that slowly, gradually, it’s becoming a Bulls town,” forward Horace Grant told a small group of reporters. “With Michael Jordan, and after winning a championship for the first time in 25 years, I think we’re creeping up on the Bears.”

Jordan was a bit more diplomatic in his response, noting that Chicago was a town that loved winners more than anything.

“Chicago is just a sports town,” Jordan said. “It’s a Bulls, Bears, Hawks and Sox town too. Everyone is winning in Chicago now, and it’s very exciting for the fans.”

Jordan paused for a second and smiled.

The Bulls would go on to become one of our only two sports dynasties — the Chicago Blackhawks won three titles from 2010 to 2015 — winning six titles in eight years before being dismantled by management before a chance at No. 7, as Jordan explained at the end of “The Last Dance.” Team Chairman Jerry Reinsdorf had a differing view, of course, but that’s all water under the bridge, at least until the next Bulls documentary.

What we do know is the Bulls have not played in the NBA Finals since Jordan’s second and final exit in 1998 and have finished with a winning record only eight times in 23 seasons entering this season. No longer are there arguments about which team owns Chicago. Even when the Bears are mediocre, they’re still the undisputed kings.

Jordan’s legacy, other than the six rings, is making the Bulls into an iconic, New York Yankees-like brand. They led the NBA in average attendance from 2009-10 through 2017-18 before falling to second behind the Philadelphia 76ers in 2018-19. But they dropped all the way to 11th in 2019-20, the last season before the COVID-19 pandemic forced teams to play in empty stadiums or with crowd restrictions, proving there’s only so much losing basketball a fan base can take.

Whether Friday’s raucous crowd of 20,995 at the United Center is a sign the Bulls are back is debatable. It was the home opener and the first game with 100% capacity since March 2020. But the decibel level no doubt was higher than it has been in years, thanks to a pinball-themed offense that fueled a 128-point performance.

“Great to have the fans back and playing in front of a packed house at the UC,” Zach LaVine said after the entertaining 128-112 rout of the Pelicans. “It’s something we haven’t had in a long time, and I think the city (is excited) and there’s a different energy around the team right now.

“We’re coming out there and we really appreciate it. It’s fun to get out there in front of the fans and put on a show.”

And it was quite a show, with LaVine scoring 32 points, including a 20-point spurt in the final six minutes of the half, DeMar DeRozan adding 26 points, Alex Caruso hearing “M-V-P” chants for a spin-o-rama layin in the paint and Lonzo Ball pulling off a triple-double and running the show as though they had been playing together for years instead of two regular-season games.

Magic Johnson and the Los Angeles Lakers might have the patent on “Showtime,” but “Zo Time” looks as if it’s going to be a ball (no pun intended … well, probably).

LaVine called Friday “the most excited I’ve been playing basketball,” and there still were 80 games remaining before Saturday’s rematch with the Detroit Pistons — which the Bulls won 97-82. Imagine if he gets into the postseason for the first time.

And like the Jordan-led Bulls of the 1990s, LaVine and his new “dawgs” rely on defense to fuel the offense, with Ball as the chief instigator from the point, socially distancing but professionally in-your-face. Whatever shortcomings he allegedly had in New Orleans have not emerged.

“I feel like the media is the ones that make those narratives, not the players,” LaVine said. “Players know who the real ballers are. It’s always what you can do, not what you can’t. He affects the game in so many ways, and it trumps the things he’s not good at.

“He works at the things he’s not good at. He stays after practice late and does everything, one of the hardest-working guys on the team, and he shows how good of a player he is by affecting each part of the game.”

Ball said the Bulls are well aware of their limitations as an undersized team. They’re willing to stick their nose in and try to force loose balls and out-hustle opponents, knowing it’s the best plan of attack.

“We know that we’re smaller than a lot of teams, so we have to use our quickness and our athleticism to our abilities, and that translates into using hands and coming down and doubling,” Ball said. “And when you see the ball, going for it. Everybody has that mindset right now and probably (is) why we’re getting a lot of deflections as a team.”

The Bulls schedule gets more difficult in the coming weeks, starting with the New York Knicks in town Thursday, a celebration of Joakim Noah’s career. That’s followed by the Western Conference-favorite Utah Jazz on Oct. 30 and four games from Nov. 1-8 against Eastern Conference powers Boston, Philadelphia (twice) and Brooklyn.

Soon after comes the always-difficult West Coast swing in mid-November, formerly known as the “Circus Trip.” There no doubt will be rough patches as coach Billy Donovan uses different rotations to create havoc, trying to find good combos with a lack of depth. But unlike recent years, you won’t need the remote ready to switch channels at halftime.

So can Chicago be a Bulls town again?

“I don’t know if any town can be what Chicago was in the ’90s because you can argue that was the most impactful era in NBA history,” Bulls play-by-play man Adam Amin said Friday. “When you’re arguably part of the legacy of a sport for a decade, it’s hard to top that for anybody.

“I don’t think this ever was not a basketball town, but I’m also significantly biased. I believe the energy in this era can be something that’s completely different. We’re in a different era of social media, of fan engagement, and the NBA’s popularity is pretty darn good. The athletes playing right now are at a different level collectively than we might have ever seen.

“So while it may not be what a lot of us remember the ’90s to be, it can be something actually unique — a one-of-a-kind feeling in this city, based on whatever fans’ pipe dreams are about what the potential is of this organization.”

It’s their town to take. Let’s see if they can run with it.