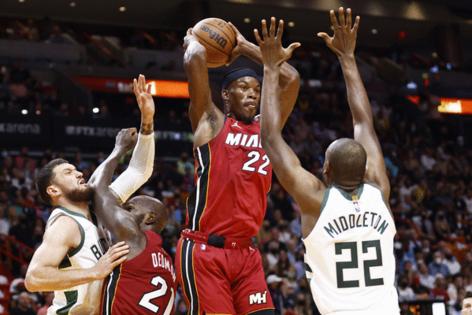 MIAMI — Last season ended for the Miami Heat with a disappointing 17-point loss to the Milwaukee Bucks in May that sent the organization into the summer reassessing its roster. The revamped and re-energized Heat opened this season with a statement win over the Bucks that only added to the excitement and intrigue of what may lie ahead.

What a difference five months make, as the Heat (1-0) crushed the defending NBA champion Bucks 137-95 on Thursday night at FTX Arena. The 42-point victory is the second-largest win in franchise history behind only a 43-point win over the Los Angeles Clippers on Dec. 29, 1994.

But the victory comes with a caveat, as Milwaukee was without six players because of injuries. Among those missing against the Heat were Bucks starters Jrue Holiday and Brook Lopez.

The Heat’s win was impressive nonetheless because of the dominance it displayed. It marked the most points Miami has ever scored in an opener.

The Heat never trailed, won the first quarter by 23 points and took a 29-point lead into halftime. Miami’s advantage grew to as many as 42 points in the second half.

Adebayo finished with 20 points on 9-of-13 shooting and 13 rebounds.

Butler ended the night with 21 points on 6-of-10 shooting, four rebounds and six assists.

Herro contributed a team-high 27 points on 10-of-18 shooting from the field and 4-of-8 shooting on threes, six rebounds and five assists.

It marked just the fifth time the Heat has had three 20-point scorers on opening night in franchise history.