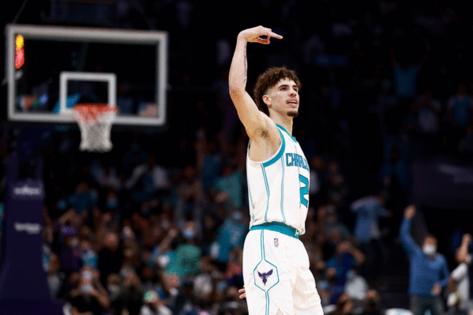 But when Ball also is shooting the ball like he did in Wednesday night’s season opener for the Charlotte Hornets, the NBA world is his oyster and the Hornets can beat anyone.

Ball scored 31 points in Charlotte’s breathtaking 123-122 win over Indiana on Wednesday night. He also had nine rebounds and seven assists, many of them during an extraordinary 24-0 run that the Hornets pulled off in the third quarter, turning a dour game into an electric night.

He made 7 of 9 3-point attempts in the game, doing a Steph Curry imitation for one evening. He’s not going to shoot like that that every night, but just the idea that he can make seven treys in a single game is going to make him harder to guard.

“I just stay in the gym, work on my game and go out there and feel confident in every shot I take,” Ball said afterward.

“He takes his game to another level when he’s making shots,” Hornets coach James Borrego said of Ball.

Ball was far from the only star Wednesday on a night when the Hornets came all the way back from a 23-point, third-quarter deficit. Gordon Hayward, playing in his first NBA game in more than six months, ended up taking over parts of the fourth quarter and scored 27 points in 35 minutes.

But Ball was the headliner, slicing through the air for layups and lofting 3-pointers with no hesitation. There were a lot more No. 2 jerseys in the stands than there were last year, partly because the Spectrum Center is now back to full capacity but partly because Ball’s popularity continues to increase. He’s hyped, yes, but it’s hard to say he’s over-hyped when he plays like that.