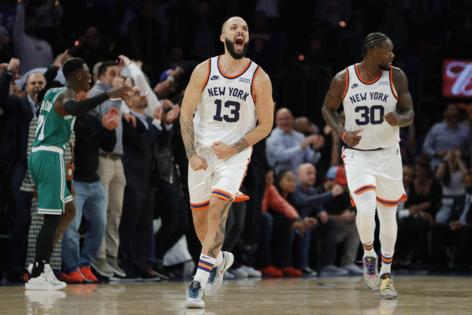 NEW YORK — In the words of Paul Pierce, who once shouted after hitting a playoff dagger for the Brooklyn Nets, “That’s why they got me here.”

Evan Fournier was signed to big money for the reasons he displayed in Wednesday’s season-opening victory, when he dropped 12 of his 32 points in the two overtimes and wasn’t shy about firing away.

“We’ve seen him do that,” Tom Thibodeau declared, “that’s who he is.”

It was a perfect introduction for Fournier, whose role is to boost the offense in ways last season’s starting guards couldn’t. New York’s $73 million gamble on Fournier (only $54 million is guaranteed) started shaky as he struggled through preseason, but the Frenchman assured his growing pains would ease once the games mattered.

Then he drained six treys on 13 attempts against Boston, outshining the other newest Knick, Kemba Walker, who managed just 10 points and was benched in the second overtime.

“(Fournier) came up super clutch in overtime, hit some big shots, so I just had to keep finding him,” Julius Randle said. “We talked after the game, there’s things we feel like we can do better, work on. He has an extremely high IQ. He’s a really good player, but he has a really high IQ. I’m excited to start that chemistry with him.”

Fournier’s chemistry with Randle is among the most significant elements to New York’s success this season. It’s no secret Randle enjoyed playing alongside last year’s starting two-guard, Reggie Bullock, who left for the Mavericks in free agency. Their connection extended beyond the court, and that was also true for point guard Elfrid Payton, who signed with the Suns.

“Two of Julius’ good friends on that team,” was how one source described the relationships.

Whether Fournier and Randle meet for dinner on the road is less important than the on-court partnership. As two playmakers working around perimeter screens, they want to establish the type of telepathic connection enjoyed by longtime teammates. It looked good Wednesday after disjointed moments in preseason.

“It takes time to not even think about it and just act on what you know,” Fournier said. “It’s going to come and the good news is it could only get better from here.”

Fournier will be in the spotlight for Friday’s game against the Magic, which represents his second return to Orlando since being traded by the Magic last season.

Orlando had been home to Fournier for the best seven seasons of his career, but it dealt him to Boston for second-round picks as the Magic barreled toward a full-blown tank job/rebuild.

Fournier noted the coincidence of playing his two former teams in the opening games of the season, but clearly the Orlando matchup is the more meaningful.

“My situation for Boston was really unfortunate. I got there and after four games I got COVID,” Fournier said of his brief stint with the Celtics. “Then after COVID I was feeling awful for like two, three weeks. I played there like 15 or 20 games, max.

“From my perspective Orlando has more meaning. I played there for seven years. It’s just funny that it’s back-to-back.”

After his Celtics career ended quickly, the Knicks made Fournier their biggest signing in free agency. They hope to see more of what transpired in Game 1.

“It felt great. There’s nothing else to say,” Fournier said. “I’m really happy with the win and with the way we fought, competed. I just wish I got those wide open corner shots knocked down but it is what it is.”

SAN JOSE, Calif. — Caren and Mike Andrews stuck to a routine. Family dinner. Every night. Everyone at the table.

For their two daughters, Malika and Kendra, family dinner became more than a nightly ritual. The dinner ...Read More