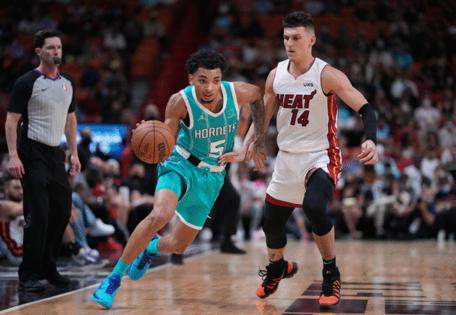 Rather than waiting and letting any lingering feelings bubbling up within the Charlotte Hornets summer for a while, the people responsible for putting the 82-game slate together gift-wrapped their opening night opponent with a bow. Some five months after their inexplicable performance in Indiana that ended their season, the Hornets have the opportunity to release some of those pent-up frustrations when they tip off their regular season against the Pacers at Spectrum Center on Wednesday night.

Nothing can completely erase the nightmarish outcome, certainly not the initial game of a six-month campaign they hope pushes well into the spring. But it can assist in soothing some of those wounds and mental scars brought on by that rough loss to Indiana in the play-in tournament back in May.

A season loaded with some of the biggest expectations in recent memory gets underway with a twist, and the Hornets are embracing the opportunity to tip things off against the team that sent them spiraling into offseason mode.

“It’s right in front of us so we are going to deal with it, and I think it’s good for us,” coach James Borrego said Tuesday. “We get to go back right at the team that put us out last year. It’s one of 82. This isn’t the defining moment of our season and everything rides on one game. There is a lot of motivation for (Wednesday) night for a number of reasons. But to go face Indiana again after what happened to end last season I think it’s great for our group.

“We’ll see how far we’ve come. We’ll learn a lot from that game. Win or lose, we are going to take a lot from that game and move forward. But I know our guys are excited to compete (Wednesday) night. There is a lot of great motivation to go out there and win a basketball game.”

That outing in Indianapolis — paired with a roster ravaged by injuries — led to quite a number of changes in the Hornets’ makeup. Depth was a major issue a season ago, among other things, and general manager Mitch Kupchak made it a priority to correct it.

Kupchak traded for Mason Plumlee, inked free agent swing man Kelly Oubre and signed veteran Ish Smith. That followed the drafting of four rookies in July and two of them could be contributors in the coming months, the headliner being James Bouknight. The reshuffling of the roster around the league’s reigning rookie of the year has increased the Hornets’ outlook exponentially.

“I know internally what our expectations are,” Gordon Hayward. “We have a lot to accomplish this year, so we are going to do our best.”

With so many new faces, Terry Rozier thought it was prudent to have a team-bonding session prior to the start of training camp. Collectively, the Hornets spent nearly a week as a unit in Miami in early September that had them eager for training camp.