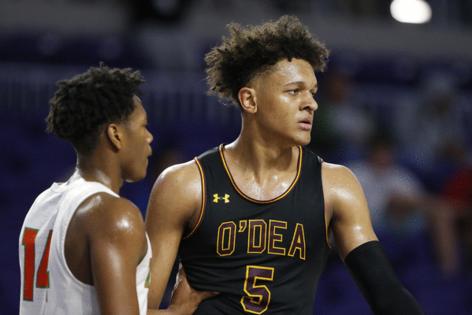 Duke forward Paolo Banchero on Tuesday became the first freshman to be named preseason player of the year in the 32 years the ACC has been picking one.

That says a lot about Banchero, a potential No. 1 overall pick in the NBA draft. It says more about the ACC.

For years, even the best ACC freshmen had to contend with waves of older talent ahead of them. Nobody in the one-and-done era or before — not Zion Williamson or RJ Barrett, not Harrison Barnes or Kyrie Irving, not Grant Hill or Kenny Anderson — has been anointed the league's best player before playing a college game.

Even Ralph Sampson would have had a hard time beating out Mike Gminski or Jeff Lamp in the fall of 1979, if the ACC was voting way back then. That was still true in 2010, when Barnes was a first-team AP all-American but didn't even make first-team all-ACC in the preseason.

To drive home the point, Banchero's selection comes on the heels of North Carolina forward Garrison Brooks receiving those honors a year ago, a very nice player who would never be confused with a superstar — and who did not even make honorable mention all-ACC at the end of the season.

By the end, Moses Wright came out of nowhere to be named ACC player of the year. The Raleigh native and Enloe graduate is an inspiring story and Wright's development is a credit to his hard work in four years at Georgia Tech, but it's also a commentary on the lack of raw talent elsewhere in the ACC.

Banchero, likewise, stands out in part because of the lack of superstar peers around him. Look back to the fall of 2018, when the ACC last had its classic blend of new and old.

Luke Maye was the preseason player of the year and Virginia returned veterans like Ty Jerome and Kyle Guy — who would lead the Cavaliers to a national title — even though Duke freshmen Williamson and Barrett would steal the show on their way to an ACC title.

Meanwhile, some of the best NBA-bound talent is at Gonzaga or Memphis or Milwaukee, or playing overseas or in the G League Ignite program, while the ACC has become a place where transfers from places like Radford and Wofford can become instant stars.

Some of this is cyclical, to be sure. This is Duke's best incoming class since that 2019 group and Jon Scheyer has more coming next year, while Hubert Davis has a strong first class coming in at UNC next fall and Leonard Hamilton continues to recruit elite talent at Florida State. But there's also no question that as the college basketball landscape has shifted, the ACC has seen its overall talent level drop.

It extends to veteran players, too. Virginia has relied more heavily on transfers lately and Louisville and others always do. This might be Notre Dame's best team in a few years, with six seniors, but none of them are stars yet the way Bonzie Colson or Demetrius Jackson or Jerian Grant or Pat Connoughton were. At least not yet: Prentiss Hubb, a second-team preseason all-ACC pick, may get there.

There are still great players in the ACC, whether they're older like Buddy Boeheim and Armando Bacot or younger like Isaiah Wong and Caleb Love or criminally underrated like Michael Devoe. There just aren't enough of them, and they lack the kind of starpower traditionally associated with the ACC.

Only three freshmen have ended the season as the ACC's player of the year, all in the past seven years, let alone started it that way. Only four sophomores have been preseason player of the year, and they're all household names now: Anderson, Elton Brand, Tyler Hansbrough, Barnes. This isn't just a Zion hangover; it's unprecedented change.

A league that had been consistently delivering first-round NBA talent — of both the one-and-done and seasoned variety — for decades, and especially the last decade, has just sort of run out, for the moment at least.

That's good for Banchero, not so good for the ACC.