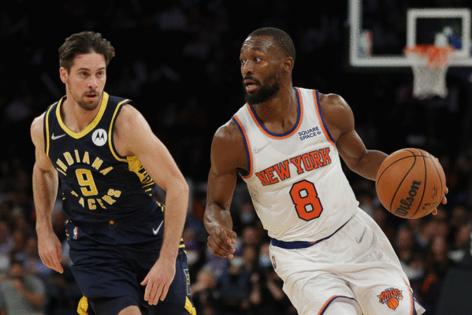 Walker, who was once billed as the point guard to bring the Celtics into title contention, said Tuesday he was surprised by the trade but understood it was about his injuries. Now he’s charged with piloting the Knicks as the local hero, starting against those hated Celtics.

“Does it matter [that we’re playing the Celtics]? Of course. It’s my old team,” Walker said. “But I don’t go into any game thinking I wanna lose, you know? So, I definitely wanna win. Does it make it that much better that it’s my old team? Yeah, no question.”

For good reason, Walker should get the loudest ovation during lineup introductions. The Bronx’s own has starred at MSG from high school through college. He’s also the big-name acquisition heading into one of the more anticipated Knicks seasons of the last decade-plus.

Add to that the storyline of a supposedly fading former All-Star who was dumped by the team he’s facing in the opener.

“I wasn’t expecting to get traded,” Walker said. “I’ve never been expected to be traded from a team, especially just because of the person I am and the kind of teammate I am, but obviously it’s not about that. It’s about what you bring to the table, and I wasn’t there all the time on the court [because of a balky knee]. So obviously, that was an issue. So, I guess that’s why it didn’t work.”

Unlike the Celtics, who two years ago gave Walker a $141 million contract, the Knicks aren’t placing too many Kemba eggs in their basket. They signed the 31-year-old after a buyout to a reasonable two-year, $18 million deal, and their backup point guard options are aplenty, with Derrick Rose, Alec Burks and Immanuel Quickley.

But for the Knicks to improve on last season’s 41-31 mark, Walker will undoubtedly need to provide positive contributions. He underwhelmed in preseason while averaging 10 points and shooting under 40%, acknowledging Tuesday that new circumstances beget growing pains.

Health, however, isn’t a problem. At least not yet. Walker’s arthritic knee prompted the Celtics to rest him on in back-to-back games last season, but he reiterated there’s no such plan with the Knicks.

“It’s not just because it’s against Boston, but also because I’m from here and I’m in a Knick uniform,” Walker said. “That’s definitely gonna just make it 10 times more special.”

PHOENIX — Draymond Green pulled up, exhausted, and watched as the nail dig into the coffin of the Warriors’ seven-game winning streak and their claim to sole possession of the NBA’s best record.

The struggles continued Tuesday night for the Detroit Pistons, whose losing streak reached seven games in a 110-92 loss to the Trail Blazers in Portland.

NEW YORK — While Knicks fans won the battle in the stands, the Nets won the war on the scoreboard.

New York City’s cross-bridge Nets-Knicks rivalry is alive and well and has never been better, as reflected by the ...Read More

PITTSBURGH – Luke Loewe scored his first points of the game on a put-back with 2.4 seconds left to keep the Minnesota Gophers undefeated this season by escaping Pittsburgh in a 54-53 win Tuesday night.

The Gators played a similar style during White’s finest hour.

HARTFORD, Conn. — The UConn men’s basketball team held on in a game that was not expected to be this close, defeating Maryland-Eastern Shore, 72-63, on Tuesday night at the XL Center.