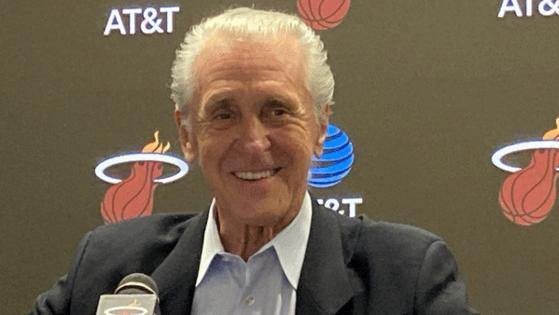 But with the Heat’s 2021-22 season opening Thursday against the visiting Milwaukee Bucks, Riley held court at FTX Arena on a variety of topics.

— Riley was asked about the Heat decision to stay under the luxury-tax threshold by starting the season with only 14 players under standard contract, one below the league maximum.

The Heat currently stand roughly $400,000 with their payroll below the punitive tax, without space to sign even an additional minimum-scale player. By avoiding the tax, the Heat would receive in excess of $10 million from the tax pool.

Riley and Heat owner Micky Arison have stressed over the years a willingness to pay into the tax when they believe the team is in championship contention. By avoiding the tax this season, however, it would ease the Heat’s position against the severe repeater tax in future seasons.

“I think you have to prove, first, that you’re the kind of team that can play at that level,” Riley said, “and then you can make that investment.

“We can jump in there is we have to.”

Riley said he first would like to get through the first 20 games before addressing the need for personnel moves.

PHOENIX — About 20 games into a season is when a team starts to establish an identity, according to Golden State coach Steve Kerr, and this year's Warriors are no different.

LOS ANGELES — While the Warriors took to the skies for a short road trip, Klay Thompson made the even shorter trek south to Santa Cruz by land. The avid boat captain gave it some thought but decided against sailing down ...Read More

CHICAGO — The idea that this wasn’t just the typical game was evident from the first possession, when the crowd’s murmur slowly increased in decibels as the opposing point guard made the first of many dribble moves ...Read More

Every so often, NBA voters err so egregiously that their oversights must be contextualized with comparisons to some of the biggest snubs in league history.