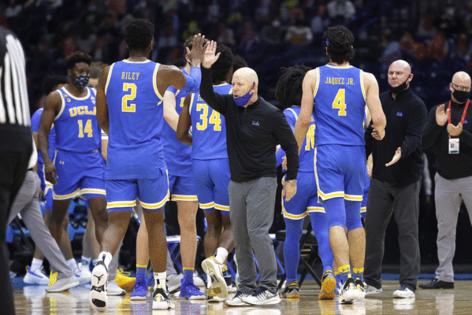 UCLA’s basketball team will open the season ranked No. 2 in the country by Associated Press, the Bruins’ highest preseason ranking since the 2007-08 season.

They may not have to wait long for a chance to take over the top spot.

UCLA is scheduled to face top-ranked Gonzaga on Nov. 23 at T-Mobile Arena in Las Vegas. It’s a rematch of last season’s epic national semifinal that the Bulldogs won on a banked 40-footer at the buzzer.

Of course, UCLA must navigate a difficult early schedule to remain unbeaten by then. The Bruins will face No. 4 Villanova on Nov. 12 at Pauley Pavilion in their second game of the season.

UCLA will also play a nonconference game against No. 19 North Carolina on Dec. 18 at T-Mobile Arena in Las Vegas as part of the CBS Sports Classic.

Oregon was No. 13 in the preseason rankings released Monday, becoming the only other Pac-12 Conference team to make an appearance. USC, Arizona and Colorado were among the other teams receiving votes.

UCLA coach Mick Cronin doesn’t care much for preseason rankings, though he recently noted he would rather be picked first than last after his team was selected the preseason favorite to win the Pac-12.

“It will not give us any points on the scoreboard,” Cronin said last week of being the top pick in the Pac-12. “We’re still going to start every game 0-0.”

The last time UCLA was ranked No. 2 before a season, 14 years ago, it advanced to the Final Four before losing to Memphis in a national semifinal. The Bruins have not been No. 1 in the preseason rankings since 1973-74, coach John Wooden’s next-to-last season.