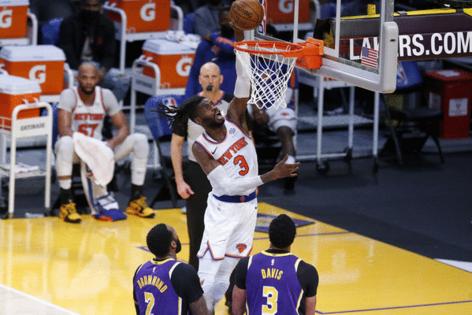 The Knicks probably won’t have their starting center for the opener.

Nerlens Noel remained out of practice Sunday and was described as “doubtful” for Wednesday’s game against the Celtics by coach Tom Thibodeau.

Taj Gibson, the 36-year-old veteran and a Thibodeau favorite, is the natural replacement after starting every preseason game.

“We feel like we have good quality depth,” Thibodeau said. “This is part of the NBA, you have guys out, and that next guy has to be ready, he’s got to step in and get the job done.”

Noel’s injury is labeled as knee pain but it’s been underplayed all preseason. Thibodeau initially said Noel was only resting when he missed the first game, and the 27-year-old later returned to full practice.

But Noel was never activated in preseason and apparently the pain hasn’t gone away.

“He’s just gotta be patient and let him work his way through it,” Thibodeau said.

Gibson is the team’s oldest player and has also been the most reliable center. He became the starter in last season’s playoffs after injuries to Noel and Robinson.

“I’m easy to adapt, even in practice, even in walk-through,” Gibson said “I will switch from third team, first team, second team, so I just read the game. I’m comfortable. I’ve been playing with these guys for a while now. Whatever the game throws at me I’m able to adjust.”

This isn’t a new role for Gibson, who has played under Thibodeau for three different franchises.

“Thibs has always had me in different situations,”Gibson said. “He’s always prepared me for starting, coming off the bench. He didn’t want me to just be a guy floating. He always told me to have my head on a swivel.”

Prior to Friday’s preseason finale, Robinson, meanwhile, hadn’t played in seven months because of a broken foot. And although the Knicks denied any complications in Robinson’s extended recovery, Gibson acknowledged Sunday that his teammate suffered a setback at some point.

Robinson was strong in his 27 minutes of preseason but was also fatigued and didn’t look ready for a heavy workload in a regular-season contest.

“He has to be out there taking contact on and doing that sort of thing,” Thibodeau said. “And that’s going to take some time, but we really like where he is.”

Rookie Jericho Sims can be utilized at center in a pinch and Thibodeau might go small with a Obi Toppin-Julius Randle frontcourt combo. It was effective in the Friday’s win over the Wizards and works to jolt the offense, but Thibodeau doesn’t like to sacrifice the rim protection of a traditional center.

“I think the rim protection is important, but sometimes, you have to inject more energy, speed,” Thibodeau said. “So, it’s something that I think the way, Obi has grown, I think it will allow us to do that more.”

Alec Burks is in the starting lineup and Kemba Walker is out of the rotation.

Tom Thibodeau announced the change amid continued struggles from the starters, and with Tuesday’s game in Brooklyn looming.

Last season, the Nets had a revelation: Move Kyrie Irving off the ball, and let James Harden’s brilliance as a playmaker dictate the Brooklyn offense.

Without Irving, the unvaccinated superstar guard whose 27 points, ...Read More

The night always starts the same, highlights from the Lakers’ star-filled past projected onto an oversized white sheet before it drops to the floor.

This curtain drop, though, felt as if it could have been followed by a...Read More

Stephen Curry got mad. And then the NBA's leading scorer did more than get even: He went on a spree that lifted the Golden State Warriors far beyond the reach of the mistake-prone Clippers and padded their league-best ...Read More

Interim Kings coach Alvin Gentry didn’t like what he saw when his starters came out looking lethargic in the opening minutes of Sunday’s game against the Memphis Grizzlies. When they did it again to start the second ...Read More

No. 7 Villanova returned from a week off fresh and energetic Sunday night, overwhelming La Salle with suffocating defense and excellent shooting.

In the second half, the Wildcats’ week off exposed some rust and ...Read More