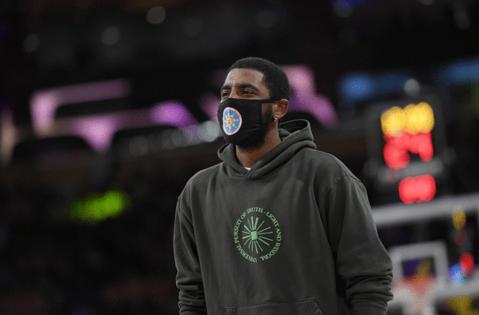 NEW YORK — We may have seen the last of Kyrie Irving in a Nets uniform.

Irving has only one more guaranteed year on his contract before he is eligible to become a free agent. The Nets entered the offseason with every intention of signing all three of their superstars to contract extensions. His decision not to get vaccinated, however, changed that and the Nets are no longer interested in offering their ineligible superstar a contract extension, according to The Athletic’s Shams Charania.

“[Kyrie] was willing to sacrifice $16 million in salary this upcoming year,” Charania said on “The Glue Guys” podcast, “and $186 million dollars as far as an extension that he will not be offered now.”

The issue there, of course, is that Irving has an additional year on his contract. Irving is eligible to enter free agency, but he has a player option on his contract worth $36.5 million. If he opts into that season in Brooklyn, there will be more drama surrounding the Nets and their navigation skills in even more uncharted waters.

In layman’s terms: If Irving doesn’t fall back into the Nets’ good graces — and get vaccinated against COVID-19 to return to play this season — and if the Nets don’t agree to an Irving trade this season, the two sides are only kicking the can down the road another year.

Kevin Durant has already signed his contract extension, a four-year, $198 million deal pinning him in Brooklyn through the 2025-26 season. James Harden was expected to follow suit, but has yet to agree to an extension.

“I’m just taking my time with it. You know, I think over the course of my career I’ve never been a free agent before,” he said on “Sports Center” on Sept. 29. “I think this season I just want to focus on winning the championship.”

The disheartening part of it all is the toll it takes on the Nets’ championship odds.

Trios were set to dominate the league, and the Lakers now have one with LeBron James, Anthony Davis and Russell Westbrook — a trio created to rival the Nets’. The Bucks have a Big 3 fresh off an NBA championship, with Giannis Antetokounmpo, Khris Middleton and Jrue Holiday. And with Ben Simmons ending his standoff and reporting back to Philadelphia, the 76ers have a Big 3, too, with Joel Embiid and Tobias Harris.

And the Clippers, well, that’s their problem: Kawhi Leonard and Paul George are great, but the need for a third star brings them down a notch.

The Nets were positioned to form a dynasty around three of the most gifted scorers basketball has ever seen. If this report on Irving holds up and the star player remains out, it’s unclear what that means for Harden’s decision to re-sign in Brooklyn.

And if both Harden and Irving are out, it’s back to the drawing board for the Nets, who will have another season of musical chairs, a game far too old for a team competing for a championship.

The 23-year-old center, who hasn’t played since breaking his foot in March, has...Read More

When Florida State head coach Leonard Hamilton served as an assistant at Kentucky under Joe B. Hall from 1974-86, he was charged with preparing the North Carolina scouting report when they played the Tar Heels.