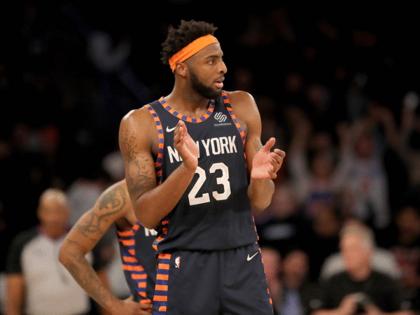 The 23-year-old center, who hasn’t played since breaking his foot in March, has been cleared for contact and “ideally” will debut in the preseason finale Friday against the Wizards.

“Every day there’s more contact,” head coach Tom Thibodeau said. “There’s more that he’s doing, and then you want to see how he responds the next day, and there’s still the conditioning element of it. He’s done a lot. He’s come back every night. He’s put in a lot of extra work. We feel good about where he is.”

Thibodeau said the final test will be Thursday’s practice, and he wouldn’t commit to Robinson’s availability for the season opener next week.

“I don’t know, to be honest with you. I always say that I believe you have to practice well to play well. So I want to see that first,” Thibodeau said. “And he’s done better. This will be a step-by-step process for him. Just be patient. And put everything you have into each day and see where it goes.”

Robinson is slated to become a free agent after the season after navigating his first three of four years on a discounted contract. He’ll likely be the backup center behind Nerlens Noel, and it’s a crowded position with Taj Gibson in the mix and rookie Jericho Sims impressing in preseason.

Robinson carries the greatest upside as a 7-foot-1 rim-protecting presence who set the NBA’s single-season record for field goal percentage in 2019-20. But then he managed just 31 games last season and endured an extended rehab after fracturing the fifth metatarsal in his right foot.

The Knicks originally projected Robinson as weeks off with the injury, with a possible return in the playoffs, but his time off pushed to seven months. He added weight in the interim, and the Knicks kept a close eye on a player with a reputation for losing focus.

“Many, many [people were assigned to keep Robinson engaged]. He was here for most of the summer. When he did go home [to Louisiana], we sent a trainer with him, we sent a coach with him. We sent basically three people who were involved at all times,” Thibodeau said. “Because he’s that important. And all our players are. I think going through a rehab like he’s going through, I think it’s important for us to be heavily involved. And he’s responded.”

Finally, there’s a date circled for his return. And it’s very soon.

“I think we all know he’s an elite rim-protector,” Thibodeau said. “He makes people miss inside. He can cover a lot of ground. He can cover up mistakes. But offensively, he adds a lot to our team, as well just putting the pressure on the rim. And you throw the ball anywhere up near the rim, he has great hands. He’ll go get it.”

When Florida State head coach Leonard Hamilton served as an assistant at Kentucky under Joe B. Hall from 1974-86, he was charged with preparing the North Carolina scouting report when they played the Tar Heels.

NEW YORK — The Nets got what they deserved with Kyrie Irving, but like a pushover parent who reached a limit on disrespect, they finally took a stand.

We’ll see if it’s too late to have an impact on Irving, who has ...Read More