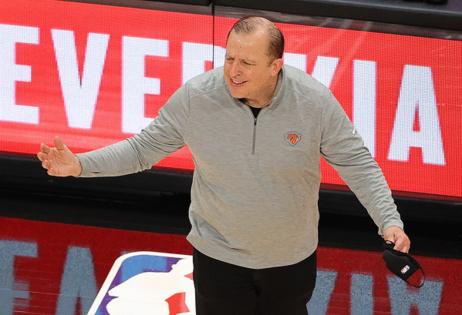 Selling is easier with proof.

Nobody is confusing New York for title contenders — and we wonder how they can possibly improve from the fourth-seed position given the upgrades around the Eastern Conference — but it makes sense, as laid out by team president Leon Rose, why the Knicks are pushing a plan of slow and steady.

“As we went into the summer, in order to build on last year, continuity and stability were two important factors in what we did,” Rose said.

Rose was guarded as an agent and remains that way as an executive, which didn’t lend itself to a particularly revealing 45-minute media session alongside GM Scott Perry and coach Tom Thibodeau. But there was enough to glean clarity on the bones of the strategy.

First, on acquiring superstars, there’s no sense of urgency. Patience has been a principal of Rose’s short tenure. Thibodeau noted that the Knicks developed one All-Star last season in Julius Randle, and his hope is to create another during the upcoming campaign (RJ Barrett is the best candidate).

There’s also the reality of a league-wide shift in free agency, with star players more frequently signing extensions and diminishing the market. In the previous three offseasons, the Knicks inked almost exclusively one-year deals with the hopes of turning the resultant cap space into star free agents.

But this summer they spent over $40 million in cap space on multi-year contracts, re-signing Derrick Rose, Nerlens Noel and Alec Burks while adding Kemba Walker and Evan Fournier.

“We got a group that was successful last year that we wanted to keep together,” Perry said. “So that you’re taking the next step in the building process. … I don’t think you can sit here and say you don’t know who is going to become free or what their interests are going to be. So a lot of times that becomes pie-in-the-sky, if you will.”

Continuity feels good after last season, and the Knicks will return their coaching staff plus 10 players. But that’s not to suggest there aren’t potential pitfalls to the plan. The Knicks are relying on players who overachieved by their career standards last season, many of whom were underwhelming in a playoff series dud against the Hawks. There are unknowns that come with a roster with seven players who are 23 years old or younger. There’s also a dependence on two points guards — Derrick Rose and Kemba Walker — with a history of knee problems.