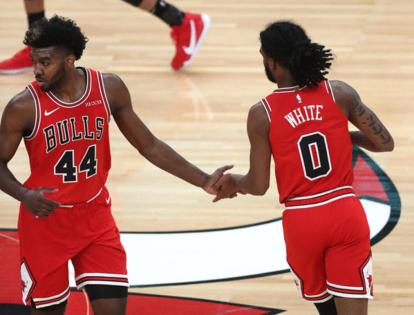 CHICAGO — The Chicago Bulls begin training camp Tuesday, but they already have a pair of injuries to navigate.

Patrick Williams has a severe sprain of his left ankle, the team announced Friday, which will keep him sidelined for 4-6 weeks. And although Coby White has been improving since he underwent left shoulder surgery on June 10, he will miss the start of the regular season and is on track to make a full return in November.

Williams injured his ankle during an optional individual workout on Sept. 15, the team said. He is receiving daily treatment, but an injury this close to the start of training camp puts his season opener in jeopardy and, perhaps, opens up the starting power forward spot for the Bulls. If Williams’ recovery takes four weeks from when the injury happened, he would be on track for Oct. 13.

The Bulls open the regular season in Detroit on Oct. 20.

White will be able to participate in the noncontact portion of training camp next week but will miss the start of the season after suffering the injury during basketball activities away from the team.

Earlier in the week, the Bulls exercised their options on both of their young players — a fourth-year option on White and third-year option on Williams. It keeps both players under contract with the team for the 2022-23 season.