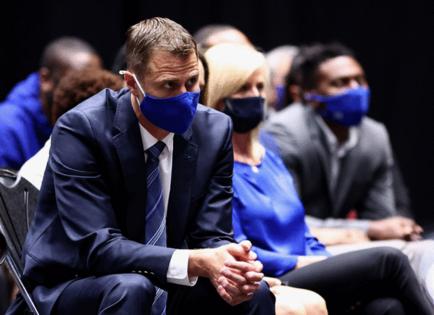 LEXINGTON, Ky. — The reinvigorated recruiting success of the Kentucky men's basketball program this offseason has filled the Big Blue Nation with good cheer.

Yet, nationally, the story of the current men's hoops moment is all about — sorry, UK fans — those dastardly Dookies.

The headline on "The Field of 68" college basketball newsletter this week was to the point: Scheyer is on fire.

When Pennsylvania big man Dereck Lively chose Duke over Kentucky on Monday, it meant that Blue Devils head coach-in-waiting Jon Scheyer now holds verbal commitments from three of the top eight prospects in the 24/7 Sports Composite Rankings for the class of 2022.

It seems that all those college hoops fans who hoped the announced retirement of iconic Blue Devils coach Mike Krzyzewski after the 2021-22 season meant the Duke program would recede in prominence may be disappointed.

Largely because of its failures in college football, the concept of tapping a head coach-in-waiting has fallen into disfavor.

Yet Duke's coaching succession plan in which Scheyer, the former Blue Devils forward and current assistant coach, was given a year's head start while Krzyzewski conducts a hoops farewell tour this winter so far looks astute.

For good measure, Scheyer has also landed the No. 56 prospect, 6-5 shooting guard Jaden Schutt. Duke also holds a commitment from point guard Caleb Foster, the No. 12 prospect in the class of 2023.

Scheyer's early recruiting success is laying to rest any thought that, once Krzyzewski retires, Kentucky might easily regain a stranglehold on the top end of the one-and-done market similar to what the Cats carved out early in the John Calipari coaching era.