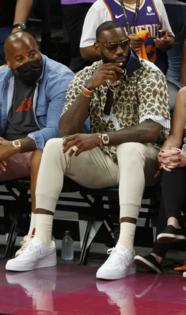 As soon as he saw LeBron James at the Lakers' practice facility, the first thing vice president of basketball operations and general manage Rob Pelinka noticed was how his forward had "slimmed up."

The 6-9 James was listed as weighing 250 pounds last season. Entering his 19th season in the NBA and turning 37 in December, James felt he needed to make a change.

"I think the thing that stands out is his fitness level, and he's slimmed up," Pelinka said on a videoconference call with reporters Thursday afternoon. "I think ... we all know LeBron studies the greats and he adds things into his game and I think going into this stage of his career he's made a decision to come back a little bit leaner and I think that's going to translate in explosiveness and quickness."

Pelinka said James has been working hard early in the morning at the team's site in El Segundo.

The Lakers have 10 new players on a 13-man roster, and Pelinka said James already is leading the way and setting the example.

"He's been very, very locked in with his training and you just get a sense he has a confidence in his teammates, he really does," Pelinka said. "I think when he looks around the locker room and sees the nameplates or with the guys he's been on the court with, you can just tell he has a high level of confidence in his teammates and what this team could accomplish this season if we all lock in."

James is seeking his second NBA championship with the Lakers, and the fifth of his illustrious career.

"I think the big word is mindset," Pelinka said. "What will the mindset of all these players be? We have 13 guys signed to contracts and it just feels like this group realizes that everyone is going to have to set a little bit of a personal thing or a selfish desire aside to come together and have the mindset of how do I make the guy next to me in the locker room great.

"And it just feels like that's LeBron's mindset right now with his teammates and that he has the belief."

MIAMI — Last season ended for the Miami Heat with a disappointing 17-point loss to the Milwaukee Bucks in May that sent the organization into the summer reassessing its roster. The revamped and re-energized Heat opened ...Read More