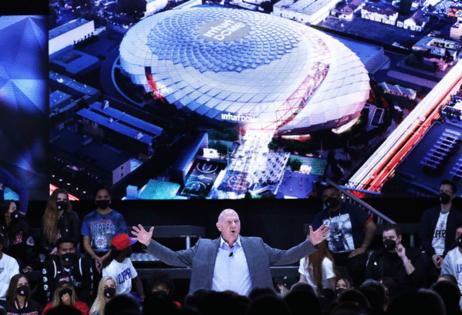 LOS ANGELES — Lakers fans, Steve Ballmer is coming for you.

Lakers fans, Steve Ballmer has a team that finished last season better than your team, and he's building an arena that will be nicer than your arena and he's constructed a roster that will last longer than your roster.

Lakers fans, Steve Ballmer knows this is exactly why you jeered his Clippers so loudly last spring, turning the town against them even as they crept to within two wins of the NBA Finals.

He gets your hate. He accepts your boos. And he's coming for you.

"Why did so many in the town cheer against us?" the Clippers irrepressible owner asked in an interview with The Los Angeles Times on the eve of training camp. "At some points it gets like this ... for a long time the Clippers were nothing, so nobody had to pay attention, and for people who had been Lakers fans forever, there's no threat."

He paused and smiled.

So all those Lakers fans who booed you in sports bars, and all those radio hosts who ripped your success on "Los Angeles" sports talk radio stations, and all those Lakers honks who wanted you to lose even though you wore the name of their city on your shirts and their favorite team was already eliminated ... all those people were actually scared of you?

MIAMI — Last season ended for the Miami Heat with a disappointing 17-point loss to the Milwaukee Bucks in May that sent the organization into the summer reassessing its roster. The revamped and re-energized Heat opened ...Read More