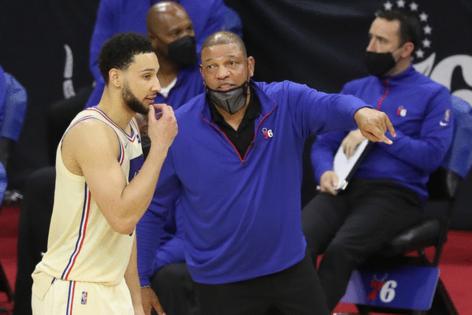 The Sixers coach said Wednesday in an interview with Stephen A. Smith on ESPN’s "First Take" that the team “would love to get Ben back ... if we can,” despite The Philadelphia Inquirer reporting Simmons no longer wants to be a Sixer and will not report to training camp next week.

“There’s been so many times that this has happened that hasn’t been reported, and the guy comes back,” Rivers said. “Listen, we’re gonna go through it. We’re gonna always do what’s best for the team. But I can tell you up front, we would love to get Ben back and, if we can, we’re gonna try to do that. Ben has a long contract, so it’s in our hands, and we want him back.”

Rivers acknowledged that a recent conversation between Simmons and the Sixers’ brass occurred, during which Simmons “gave his reasons [for wanting out of Philadelphia], which we obviously didn’t agree with.”

Rivers also pushed back on how his postgame comments about Simmons following Philly’s Game 7 loss to the Atlanta Hawks in the Eastern Conference semifinals were portrayed.

“What disappointed me, and I don’t do this ‘[blame the] media’ thing very often, you never see me do that. It was being portrayed that I was out there saying I don’t think we can we win with Ben, and I do. I told Ben that the next day. What really disappointed me was, the next day, I went on and said, ‘Guys, you all know exactly what I was talking about,’ and no one heard it. They just kept running their narratives.

“You know, I’ve been in sports a long time and I’m not misrepresented very often, but in that case I was. But it is what it is. Ben knows, Rich [Paul, Simmons’ agent] knows and I know.”

The comparison turned out to be an affront to basketball humanity, because these days it's better to be compared to Kyrie Irving or Ben Simmons rather than James Harden.

As the Dallas Mavericks start their 2021-22 regular...Read More