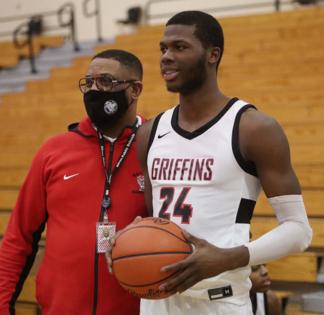 LEXINGTON Ky. — When Chris Livingston, the latest five-star basketball recruit to commit to Kentucky, was looking for a new place to finish his high school career, he met with legendary Oak Hill Academy head coach Steve Smith, who realized that one line of questioning spoke volumes of the 17-year-old’s mindset.

“Coach, can I get into the gym in the mornings?” Livingston asked him. “What about the weekends?”

If the 6-foot-6 wing — long considered to be one of the best players in the 2022 class — was going to leave his hometown of Akron, Ohio, for his final year of high school basketball, he was going to do so with certain goals in mind.

Smith has coached arguably the greatest high school program in America since 1983, and dozens of his former players have gone on to the NBA. He’s come across all manner of talent and personalities in that time. In Livingston, he sees a player who’s already an elite prospect, but one yearning to improve.

“He came here to be challenged,” Smith said. “He could have stayed home and averaged 35 points per game, get Mr. Basketball in Ohio, and probably play half-speed. But he chose to come here. I think that says a lot about him.”

Livingston, who arrived on Oak Hill’s campus a few weeks ago, announced his commitment to Kentucky on Wednesday night, picking the Wildcats over a list of finalists that also included Georgetown, Memphis and Tennessee State.

This past high school season, Livingston averaged 31.1 points, 15.8 rebounds, 6.1 assists, 4.7 steals and 4.0 blocked shots per game, earning first-team junior all-American honors. This past summer, he was clearly one of the top players on the national Adidas circuit. Earlier Wednesday, he was ranked as the No. 5 player in his class by 247Sports.

He wants to be even better.

To answer that question about the Oak Hill gym, Smith told Livingston that they open it up every day at 6 a.m. On the weekends, it’s available from 6 in the morning to 11 at night. Players can grab a teammate, call on a manager, or just hit the court themselves.

Livingston plans to take advantage of that over the next several months, before his planned arrival in Lexington next summer. Smith said the first month at Oak Hill is almost always difficult for his new players, who are usually leaving home for the first time. Livingston, however, has had a smile on his face at every encounter since he arrived, always saying something about how much he loves his new surroundings.

MIAMI — Maybe it’s as simple as just having starting point guard Kyle Lowry on the court.

Lowry returned from a one-game absence and the Heat (2-1) bounced back from Saturday’s overtime loss to the Indiana Pacers ...Read More

MINNEAPOLIS — As Anthony Edwards once again turned Target Center into his own personal playground on Monday night, the energy coursing through the crowd made it felt like Edwards was singularly going to bring the ...Read More