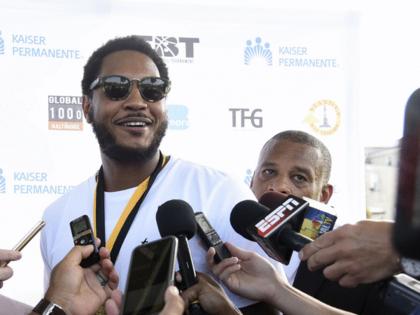 BALTIMORE — Los Angeles Lakers forward Carmelo Anthony, one of the most prolific players of all time, never dreamed of playing in the NBA. Growing up in Red Hook, Brooklyn, and the Murphy Homes in West Baltimore, the only thing that mattered was seeing the next day.

In Anthony’s new memoir, “Where Tomorrows Aren’t Promised,” the 10-time All-Star opens up about his life before scoring titles, Olympic gold medals and the glory that comes with being an NBA great.

He takes you on his journey of moving from Brooklyn to Baltimore at the age of 8. Anthony had to grow up quickly, as violence, racism, and a troubled education system affected his childhood. Anthony said Baltimore had a different type of coldness where violence, pain, and murder were the city’s makeup. “People nicknamed this place Bodymore, Murdaland,” Anthony writes in his book.

Anthony went on to become a basketball star at Towson Catholic, which closed in 2009, and Oak Hill Academy in Virginia. Despite winning a national championship with Syracuse and getting drafted third overall by the Denver Nuggets in the 2003 NBA draft, he says he still looked over his shoulder, as the past intertwined with his daily life.

Anthony recently did an interview with The Baltimore Sun about his new book, growing up in Baltimore, receiving the inaugural Kareem Abdul-Jabbar Social Justice Champion Award and why he thought an NBA career could never be a reality.

(Editor’s note: This interview has been edited for length and clarity.)

— Q: New team and a book coming out, how are you feeling right now?

— A: For [the Lakers], I feel excited about that just because of the opportunity that’s in front of us. But I’m more excited about the book at this very moment. People reading it and getting a better sense of my story.

— Q: What made you want to publish a memoir about your upbringing?