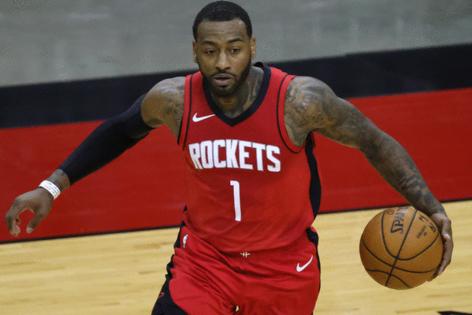 Veteran point guard John Wall and the Houston Rockets have reportedly reached an agreement on the inevitable: The Rockets will trade their former All-Star ... whenever the opportunity presents itself.

So far, however, that has appeared near impossible. Wall is due an atrocious $92 million over the next two seasons. Only two players are set to make more than him in the 2021-22 NBA season: Stephen Curry and James Harden.

On a league-worst Rockets team tattered in the aftermath of the Harden deal to the Nets, Wall averaged 20.6 points, seven assists and 1.1 steals last season.

Not max-player numbers by a longshot, but not scrub numbers either.

At his peak, Wall was regularly mentioned among the league’s premier point guards, stringing together an average about 20 points and 10 assists over a three-year span.

His injury history is so extensive the Rockets have decided to shelf him to preserve his trade value, rather than play him and risk re-injury to improve it, according to The Athletic.

That setup works for both parties on a number of fronts. The Rockets went guard-heavy in the 2021 NBA draft, selecting Jalen Green second-overall and Josh Christopher 24th. Wall will be with the team during training camp, per The Athletic, and will play a mentorship role with the rookies.

Keeping Wall away from the team when the games begin, however, works in Houston’s favor by keeping the spotlight away from him and, of course, mitigating his re-injury risk. It also gives the Rockets time to assess the landscape and see which teams are in dire need of a point guard mid-season.

CHICAGO — Whether it was the sellout crowd in Wintrust Arena or the lions at the art institute draped in their attire, the Chicago Sky felt the presence of the city in a 86-50 win over the Phoenix Mercury on Friday night...Read More

Haliburton is entering his ...Read More

That led many to ...Read More