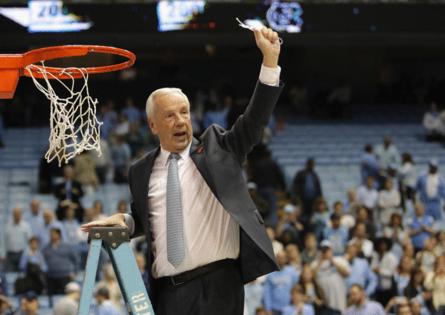 RALEIGH, N.C. — Roy Williams is back being an assistant again. The former North Carolina men's basketball coach is serving as the ambassador for the Asheville Championship, a basketball tournament created after the city successfully pulled off playing host to the Maui Invitational last year.

The inaugural event will feature South Carolina, Minnesota, Western Kentucky and Princeton at the Harrah's Cherokee Center in Asheville, N.C., on Nov. 12 and 14.

Williams used to love taking his teams to Maui every four years from his time at Kansas and it continued during his 18 seasons at UNC. He used to joke with tournament director and former Wake Forest coach Dave Odom, that he wouldn't want to take his place, but he'd love to be his assistant.

"I've kidded with Dave that I didn't want to do all the work that he did but I just wanted to go to the Maui tournament and watch it all the time," Williams told the News & Observer. "So then Dave all of a sudden calls me and says, 'I got one thing I want you to think about.' "

That one thing involved basketball and his hometown so it didn't take much for Williams to be sold. Williams, an Asheville native, said the games will take place about 30 minutes from where he still owns a home and right up the street from where he grew up playing.

"Right down from the civic center used to be the old YMCA, which is where I lived for many Saturdays for a long long time as a young kid," Williams said. "So I love that area, they love college basketball and getting a tournament in there."

The Maui Invitational was moved to Asheville last season among concerns of having eight teams traveling to Hawaii during the COVID-19 pandemic. The games were not opened to the public due to the state's protocol at the time for indoor arenas.

"Last year when we were there with Texas, Stanford, Indiana — I mean that place would have been packed every single night," Williams said. "And so thinking about doing a tournament there was something I was interested in. I want to do anything I can to make them to make it be successful and try to get the people to buy the tickets and come to the games."

No one knew it as Carolina lost to Texas on a buzzer-beating shot in the finals, but it was a final hurrah for Williams in his hometown. The event was akin to the UNC tradition coach Dean Smith began of scheduling a game in the hometown of his senior players as Williams announced his retirement in April.