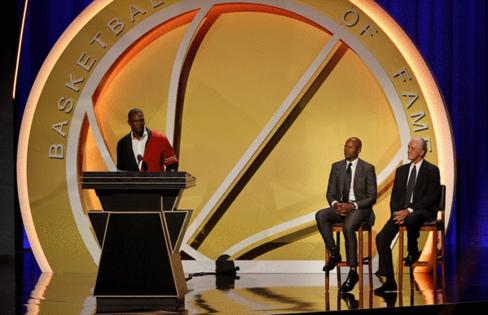 Chris Bosh arrived last to the podium Saturday, the final of the 16 inductees from the Class of 2021 to be enshrined at the Naismith Memorial Basketball Hall of Fame.

But he also arrived earlier than expected, his career cut short in 2016 by blood clots, the former Miami Heat forward offering his compelling oratory in Springfield, Mass., at age 37.

While his legacy lacked in terms of tenure, the words of the two-time NBA champion with the Heat resounded with the emotion of a player having reached the game’s pinnacle.

With Pat Riley, Erik Spoelstra, Dwyane Wade, LeBron James, Ray Allen and many others from his Heat tenure in attendance, Bosh offered appreciation for what the game gave him until it was taken away at 31, speaking after a video tribute highlighted by his series-saving rebound in Game 6 of the 2013 NBA Finals.

Bosh started his speech by thanking Riley and Allen for being at his side as his Hall presenters. He then returned to Riley the 2006 Heat championship ring Riley loaned him during 2010 free agency until Bosh won one with the Heat. Bosh won titles with the Heat in 2012 and ‘13, never finding a moment as weighty as Saturday’s for payback.

But it was Bosh’s words about the profound impact of the game being snatched away in the middle of the 2015-16 season that in many ways carried a night that also featured acceptance speeches from Bill Russell, Ben Wallace, Chris Webber and Paul Pierce, among others.

Because no one else Saturday experienced a moment such as the one Bosh reflected upon, “when the doctor told me I would have to choose between risking my life every time I stepped on the court or retiring from the game at age 31.”

He paused. Then continued.

“After working as hard as I could,” he said, “the practices, the weight sessions, the bus rides, the film, going back at night to work on my game, after finally making it to the mountaintop, with so much more to do in my mind, so much more to prove, suddenly it all stopped.

“By now I don’t have to tell you that there were plenty of tears that day, and in the days since. But in going through those crossroads, that I eventually came to realize that we all have it in our power to make the most out of every day, despite what happens, to turn setbacks into strengths.”

Earlier in his speech, Bosh spoke of growing pains that eventually would lead to championships, including the two with the Heat, of tears shed after setbacks, including those televised to a national audience when the Heat lost the 2011 NBA Finals to the Dallas Mavericks, the first season of the Heat’s Big Three collaboration with Wade and James.

“But when I think about it, they were more than tears. They were the water that made it possible for the seeds of greatness inside me to grow, and they’re the reason that that little kid, with those thin, makeshift posters on the wall is standing in front of his heroes, tonight, as a member of the Naismith Memorial Basketball Hall of Fame.”