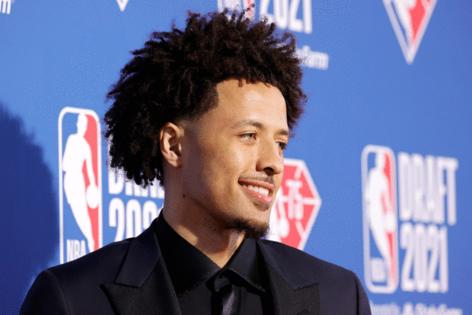 NEW YORK — Waiting is almost always hard to do.

It’s especially hard for the Pistons and their fan base, who have struggled through more than a decade without a win in the playoffs.

The crowd at Barclays Center cheered as Cunningham, donning an all-black suit, black shirt and black tie, strode to the stage to shake hands with NBA Commissioner Adam Silver.

The Pistons were focused on Cunningham, an uber-talented 6-foot-8 wing, since they won the draft lottery last month. With the pick now official, Cunningham, 19, will fit into their rebuild nicely, alongside last year’s first-round picks, guard Killian Hayes, wing Saddiq Bey and center Isaiah Stewart, as well as forward Jerami Grant.

The pick ends weeks of speculation that the Pistons were considering trading the top selection to acquire more future assets to help in Weaver’s roster rebuild. The Pistons also were interested in G League guard Jalen Green — the No. 2 pick by the Houston Rockets — but after a final meeting with Cunningham and his representatives on Wednesday night, the Pistons met Thursday morning and decided to select Cunningham.

After a 20-52 season, the Pistons showed that they have plenty of improvement to make before they’re a contending team, but adding Cunningham, who has a rare blend of size, ball handling, scoring and leadership, puts a major piece to the puzzle.

Cunningham’s versatility will allow him to play several positions on the court, including either guard spot, small forward, or potentially power forward in a small-ball lineup. There has been some concern that he and Hayes would have trouble playing together.

Mike Boynton, Cunningham’s coach at Oklahoma State, has seen enough to know there isn’t an issue there and that Cunningham can blend into a variety of lineups.